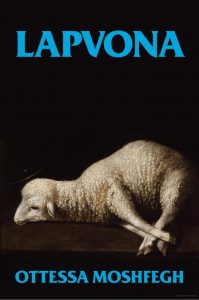 Beginning with a bout of banditry followed by all manner of bastardry, LAPVONA rails against royalty and religion, flaying blind faith, flagellating clergy, flogging the gentry.

Moshfegh’s narrative warps and wefts several characters in a weave of intricate design, of warped bloodlines and fates entwined.

In the course of one Spring to another, Little Marek, abused and orphaned son of a god fearing shepherd, witnesses the resurrection of his thought to be deceased parents and makes his own ascension from pauper to prince.

Sounds like a happy ending but in LAPVONA happy endings are eschewed by beheadings and bloody entrails. His long lost mother, for instance, is robbed of her home, her innocence, her freedom, her family and her tongue. Thirteen years slave to the nuns, a convict of a convent, she escapes only to raped, impregnated and made prisoner in a palace.

The castle is the home of Villiam, a vainglorious villain, a malevolent monarch who is a water thief in time of drought and famine. He has a let them eat cake mentality, except his subjects are forced to eat themselves.

Truth interred, lies exhumed, if it wasn’t fiction you’d believe it to be true. This once upon a time fractured fable is revealed to be a more than once upon a time, the elements have always been here, and still are.

LAPVONA is a brutal and unflinching portrait of debased power and privilege, both shocking and curiously exhilarating. From squalid materials, Moshfegh fashions a strangely compelling story, dark and dire, vivid and livid.

LAPVONA by Ottessa Moshfegh is published by Jonathan Cape.