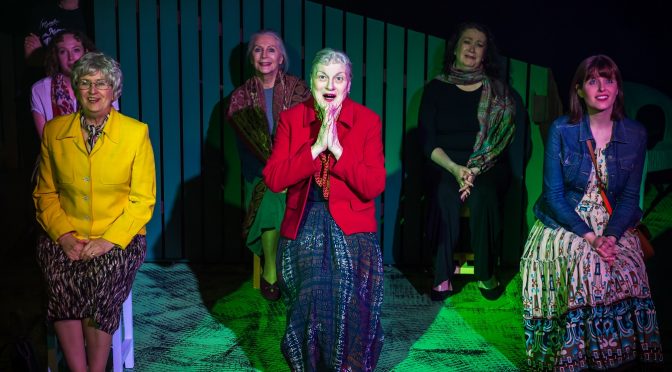 It was so good to be back at the theatre again. The last time was in March before Covid hit. The venue was Newtown’s New Theatre, one of Sydney’s oldest and most treasured venues.

The play was Lally Katz’s play NEIGHBOURHOOD WATCH first performed upstairs at Belvoir Street with Robyn Nevin in the leading role in a part that was written for her.

In this New Theatre production directed by New Theatre Artistic Director Louise Fischer, actress Colleen Cook steps into the role, an actor who has worked in the theatre industry for some sixty years.

Cook gives a very fine performance as Ana, a feisty, elderly Hungarian woman who has been through wars and lived life as a refugee. (There are flashbacks to her troubled past during the play).

Katz’s play really gets moving when Ana befriends her  neighbour twenties something want to be actress Catherine, well played by Kelly Robinson.

Susan Jordan gives a fine, comic performance as Ana’s long time friend, Jovanka, who is regularly inviting Ana for a cup of coffee and is always rejected.

Humour is incorporated in the production especially with the quite unique sound effects of Ana’s boisterous, very territorial dog.

The show features a.largeish cast, with some actors playing multiple roles which they do so well.

Tom Bannerman’s set fitted in well with a variety of picket fences.