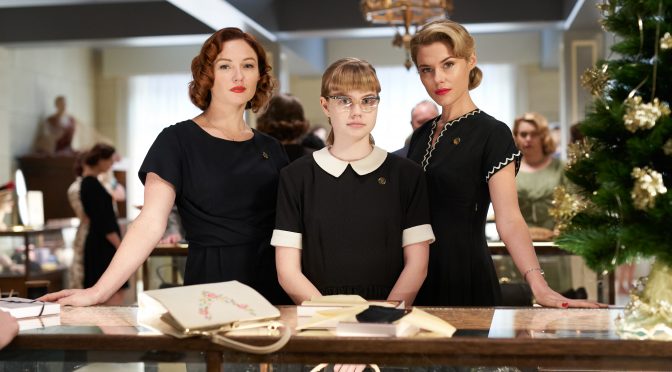 Set two years after They’re a Weird Mob was published, LADIES IN BLACK, looks at the impact of European migration in late 1950’s Australia.

It’s the summer of 1959, when Lisa, aged sixteen and a bit of a swat, takes a holiday job at the prestigious Sydney department store, Goode’s. There she meets the “ladies in black”.

Lisa has just completed her leaving certificate, has applied for a Commonwealth Scholarship to university and has dreams of becoming a poet.

At the department store, she is beguiled and influenced by Magda, the vivacious manager of the high-fashion floor, a refugee from war torn Europe.

This was a time that many Australians were suspicious of reffos, balts, or the more optimistic official title, New Australians. They talked funny, ate weird food and some blokes took an interest in cooking other than a barbecue.

Based on the novel ‘The Women in Black’ by Madeleine St John, LADIES IN BLACK is written by Sue Milliken and Bruce Beresford and directed by Beresford.

Poignant and funny, LADIES IN BLACK is first class in its bid for period authenticity with grand gestures of verisimilitude conjured by production designer, Felicity Abbott and costume designer, Wendy Cork, and cinematographer, Peter James marks his thirteenth collaboration with Bruce Beresford, a partnership that began with Driving Miss Daisy.

The cast is also first class: Julia Ormond as the imposing Magda, Angourie Rice as Lisa, Shane Jacobson and Susie Porter as her parents.

LADIES IN BLACK is both a beautifully tailored nostalgia trip and a salute to multicultural amity.