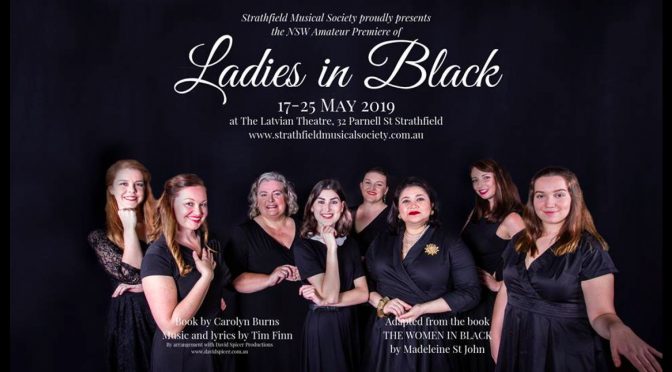 LADIES IN BLACK is a thought-provoking comedy drama about the lives of a group of department store employees in 1959 Sydney Australia, with important female lifestyle messages that are still relevant today. Timeless and memorable coming of age story, focused on the naive bookish ultra-intelligent sixteen year old Lisa Miles.     December 1959 she takes a summer job for two months, at F.G. Goode’s department store, which is a fictional business that is loosely based on the Australian department store chain, David Jones Limited. The required work-uniform that all female counter staff wear, is the LBD (Little Black Dress) made iconic and famous by Coco Chanel when published in Vogue Magazine in 1926.

Sydney at long last, was becoming the multicultural cosmopolitan city, which it should always have been. Unjustified racist prejudices about the vast influx of war-ravaged European refugees (the continentals) is evident. Lisa is initially employed in the “Cocktail Frocks” department at Goodes. Her journey of multicultural discovery starts with Lisa meeting Magda, who runs the “Model Gowns” department at Goodes. The musical examines the ever expanding roles of women in society, in Sydney 1959.

NSW Amateur Première of “Ladies in Black”. This unique and truly joyful production of LADIES IN BLACK is an absolute must see, with superb music and delicious lyrics by Tim Finn. Director CATHY BOYLE helped shape the musical with magnificent panache, by applying her unique vision to solving the many difficulties inherent in the original staging of LADIES IN BLACK as created by Queensland Theatre Company. Her magnificent solutions were a superior move, as she cleverly transformed LADIES IN BLACK to even greater heights. Her well-chosen cast, with their harmonious choir of ensemble voices, easily delighted all. Isobel Lim as LISA MILES is a knockout, at all times giving a very memorable performance.

1950s Sydney style furniture for each of the large number of sets, colourful and beautiful 1950s costumes galore, with absolutely flawless physical set changes. Impressive Digital FX Design by Adam Ring and Char Rogan delivered via 2K video front projection, created crisp and very detailed digital backdrops that permitted fast and quite flawless scene changes, and is fully ready for use by other Musical Societies.

LADIES IN BLACK occurs in December 1959, plus January 1960. Locations exactly matching the original QTC production, and is mostly set inside F.G. Goode’s department store, Sydney CBD plus a Sydney City pub, Lisa’s Chatswood home, Patty’s home, Fay’s home, plus inside Magda’s Mosman home and at the idyllic Balmoral Beach at Middle Harbour. However the musical has some revealing mistakes with the anachronisms of RUDI and FAY exiting from a cinema screening of the 1951 Warner Bros. movie film “A Streetcar Named Désiré” which only screened four times a day, for a very limited run, at the Regent Cinema in George Street, Sydney from 4th July 1952. Last screening at 7.40pm 10 November 1953 at the Capitol Cinema. Of course by choosing that movie, immediately permits the clever witty one-liner quip, “Why is the streetcar called Desire?” and the unspoken answer is that Désiré is the final destination of the streetcar within the Désiré Area, which is a suburban neighbourhood of the City of New Orleans, Louisiana, USA.

#7 “THE BASTARD SONG” firmly about compromise and acceptance, is my all time favourite Tim Finn song, with its cute Australian lyrics, and is always an audience pleaser. Unfortunately Queensland Theatre Company decided to refuse to issue an Original Australian Cast CD soundtrack album of LADIES IN BLACK. The witty commentary on Sydney versus Melbourne, and “Crossing the (Harbour) Bridge” always plays well with Sydney audiences.       RUDI states “I have decided to marry an Australian (girl)” which soon leads to a very clever song #14 “A NICE AUSTRALIAN GIRL”.       #22 “I JUST KISSED A CONTINENTAL” song, caused continuous whoops of delight from the opening night audience. Highly recommended.

Of course the ultimate message intended for all Australians, is delivered to LISA MILES by MISS JACOBS “A clever girl is the most wonderful thing in all creation you know. You must never forget that. People expect men to be clever and girls to be stupid or at least silly, which very few girls really are, but most girls oblige them by acting like it.” MRS CROWN states everything you need to know about Australian males with – “No one understands men. We don’t understand them, and they don’t understand themselves . . . They can’t really manage by themselves, men can’t. They think they can, but they can’t. They’re just babies.”

STRATHFIELD MUSICAL SOCIETY presents the NSW Amateur Première of  LADIES IN BLACK, the musical stage adaptation of Madeline St John’s Australian novel  THE WOMEN IN BLACK, with music and lyrics by Tim Finn and book by Carolyn Burns.

All Performances are at The Latvian Theatre, 32 Parnell Street, Strathfield, NSW

Duration of 155 minutes (including the one interval). 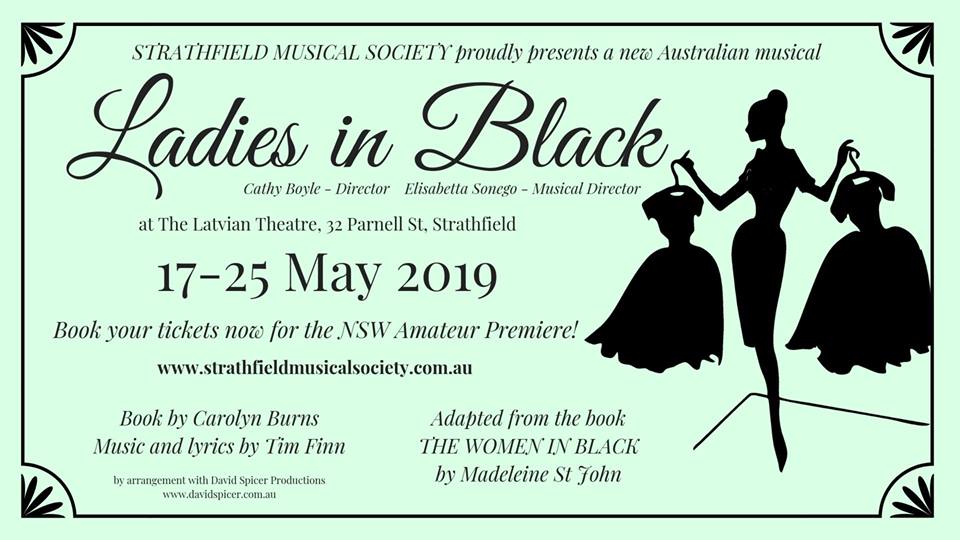