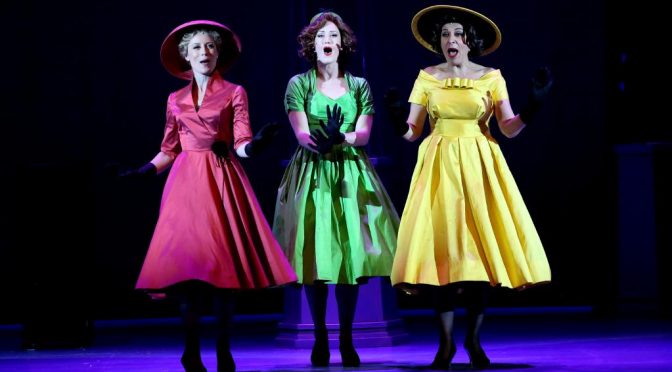 LADIES IN BLACK, a new Australian musical, has made an impressive Sydney debut at the Star’s Lyric Theatre.

The musical follows the lives of a  group of women, the Ladies In Black of the title, working at a Sydney Department store.

The women are a quirky work bunch, and there’s plenty of interesting stuff going on in their lives for us – the audience – to find ourselves immersed in the evening. Here are just a few of the stories…There’s the young rookie Lisa (Sarah Morrison), just having completed her Leaving Certificate, who has take on a summer holiday retail job till she starts tertiary studies. She has a lot going on – mainly to do with her wanting to make her own life for herself and having to contend with over protective, working class parents.

She also has literary ambitions, she fancies herself as something of a poetess. That doesn’t quite go down well with her colleagues who give her a bit of ‘stick’.

There’s Patty  (Madeleine Jones) who is in a difficult marriage with Frank (Tamlyn Henderson), where the couple have wanted to have children but have so far been unable to. Now the weight of responsibility for this failure is falling on the hapless Frank….

There’s Fay (Ellen Simpson), a single lady trying very hard to find a partner, but finding that there’s a dearth of good, available men around. Then she falls for Rudi (Bobby Fox), a guy from Europe,. Aussie women just didn’t that kind of thing back in those days! They stuck to their own. We are talking about Sydney in the 1950s.

Much of the enjoyment of this piece is about observing how people of this  era behaved, as they ‘sat’ on the cusp of a period of great social change.

Tim Finn’s score – he did both the music and lyrics – is a delight. The score features a good range from poignant ballads to big company numbers. The songs always complemented the action with the lyrics voicing the characters’ inner thoughts.

Simon  Phillips  production is fast paced, vibrant and features some great light touches which Phillips is renowned for.

His cast rise to the occasion and all come up with winning performances.

Highly recommended, the Queensland Theatre Company’s production of LADIES IN BLACK, a stage adaptation of Madeline St John’s novel of the same name, book by Carolyn Burns, music and lyrics by Tim Finn, and directed by Simon Phillips is playing the Lyric Theatre until 22nd January.