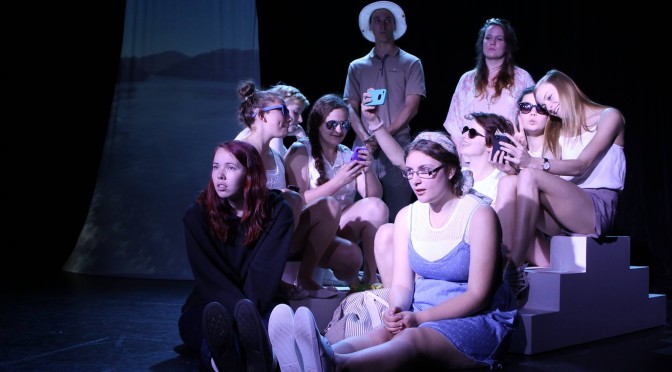 Lachlan Philpott’s latest play, THE CHOSEN, is a multi-layered and deceptively complex work that focuses on the isolated Freya, played by a perfectly cast Belinda Hodgson. Recently relocated with her mum (Chloe McKinnon) and younger brother, Tiddy (Kelty O’Shea) to Grove Grammar in Brisbane from a list of other places, including Andromeda, Freya has become very used to her status as the bullied outcast at school. Her raging skin condition, which she attempts to hide by wearing jumpers in summer, makes her an instant target for the ubiquitous bullying tribe.

When she is teamed with fellow outcast, Cecilia (a very talented Marjorie Butcher) on a music project, the two immediately bond, sharing their passion for books and accepting their individual differences. After an afternoon of bonding, Freya convinces Cecilia that they should audition for the choir, led by the equitable Monica (Rachel Adams.) Of course, the leader of the bullying mean girls, Anna, a suitably attractive, acerbic and arrogant Brittany Ferry, is the favoured soloist but when Cecilia unleashes a talent that shocks and usurps, a series of experiences and events ensues that leaves more questions than answers.

Lachlan Philpott co-wrote the play with Brisbane Girls Grammar students after being inspired by an SBS documentary My Mother Talks to Aliens. He conducted 50 interviews with Australians who shared their stories, stating that, “…it soon became apparent to me that people who claimed to have any sort of alien encounter were the subjects of ridicule.”

Freya believes she has been taken by aliens and came back with the reptilian skin condition. She is also convinced that the disappearance of her father was an alien abduction and she constantly looks to the stars for communication.

The scenes with the a cappella singing of the choir is goose bump material and the assembled cast is incredibly believable as a group of school girls and as the choir. The fact that the choir is doing a set list of songs about outer space is, of course, serendipitous. Nevertheless, they can sing. Choral director, Zoe Arthur has made them truly show worthy.

The eerie and other worldly atmosphere is greatly enhanced by the backlit projections and moody lighting design, created by Lyndon Buckley. A simple white draped rear curtain serves as a scrim for an array of images, including the moving sky and stars at night, backlit people, Cecilia’s ‘dobbing’ cockatoo and a sulking by the water Anna.

This is further supported by the simple but highly effective set and costumes, designed by Nicola Barber. We seamlessly move from foyer to staffroom to netball court, home, bookshop, street, a boat broom cupboard and many other places with minimal fuss and complete ease and comprehension. A table and chairs and a tiered segmented circular podium are effortlessly manipulated throughout the scenes by the characters without anyone really noticing.

Director Amy Hardingham demonstrates a clear comprehension of the multi layered complexities of Lachlan Philpott’s script. The characters are totally believable, even though many are played in a stylized or heightened naturalistic manner. The caricature nature of some of the roles, such as teacher Mr Waldo, (Lachlan Bartlett) and Dr Kwak (Taylah Crouch) balances with the eerie and surreal atmosphere that weaves in and out of the production. At times it is quite dreamlike; when Freya’s hero, Australian astronaut Popsy Nicholl, turns up at the bookshop to sign her book she is so spaced out that we too question whether the mission to Mars with the Chinese was real or a mock up.

That is at the crux of THE CHOSEN. How do we know what is real and true? Can we ever know? Everyone seems to have a different reality and perception. Tiddy believes himself to be a dog for the majority of the play, but at the end that mysteriously changes. Cecilia’s family life is clearly disturbingly odd with an unseen but oppressively omnipresent father, Dr Kwak is unnerving and appears to know more than she is revealing and Freya’s suitcase suddenly reappears after she is convinced it was thrown overboard on the way to choir camp. Philpott raises questions and doesn’t attempt to answer any of them, which is far more real, ultimately.

I left pondering on realities, perceptions and humanities place in the universe. Are all individuals who claim to have had extra-terrestrial experience fabricators? Cecilia’s faith in a God is never questioned, yet Freya’s belief in aliens makes her the target for torment. Our desire to be unique and our unswerving dedication to our own aspirations and dogma can sometimes close down connections, repel others and cause us to make judgments without investigation.

This is a sophisticated script for young people that has been sympathetically and cleverly cast and staged. TANTRUM Youth Theatre has definitely produced a show that will be remembered and Lachlan Philpott, already an accomplished playwright, has delivered a script that is resonant with integrity and is destined to be explored and enjoyed by many more companies. No review can do it justice – go see it.

This outstanding production can next be seen at the ATYP Studio 1 where it will be performed between Wednesday 1st October and Saturday 4th October, nightly at 7pm.