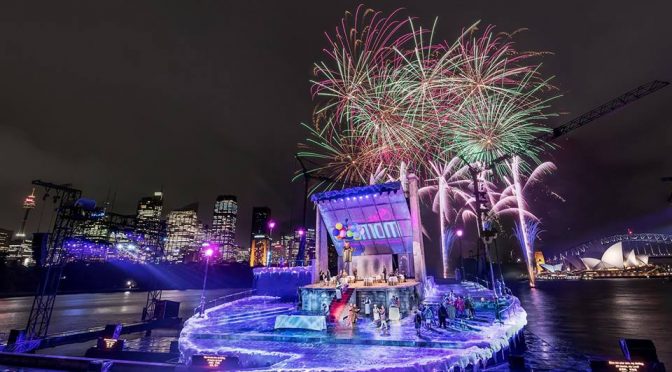 After days of torrential rain the clouds parted last night to make way for a love story on, and to, Sydney Harbour.  Cool for the audience and lots of ‘cool daddy cool’ on the stage, we were treated to a new Opera Australia production of Giacomo Puccini‘s LA BOHEME.  Set in France during the student riots of 1968, the stormy relationships of the two pairs of lovers are backgrounded by grassroots rebellion and oppressive crackdowns, all in a freezing winter of global unrest. With fire and snow, Handa Opera on the Harbour passionately immerses us in this evocatively created Paris of Discontent.

Friends Marcello and Rodolfo, creative spirits, painter and poet, are gathered in a garret in Paris bemoaning the coldness of their environment and the dead fire in front of them.  They decide to burn Rodolfo’s play manuscript which gives but scant warmth. Colline, the philosopher, joins them joylessly having been unable to sell some books but remedy arrives in the form of Schaunard, a musician who has just scored big with a dodgy gig involving a dead parrot.  There’s another win for the friends over their landlord and a plan to eat out in the Latin Quarter.

Rodolfo stays behind to write an ending when his peace is interrupted by Mimi looking for a light for her candle. Darkness, and a supposedly lost key, inflames acquaintance and Mimi will accompany him to the café where the second loving pair are rekindling a fire.  Marcello is still put out with former lover, Musetta who is putting on quite a flirty show to re-attract his attention but Mimi sees there is still love between them.  All will be well as the friends and lovers finagle their way out of paying the bill and disappear into the snowy night of interval.

Director Andy Morton’s LA BOHEME is set firmly in a time and place not far from our own, I remember the news footage well.  So important is 1986 to the rise of modern social consciousness and the emergence of a different kind of creativity, that the Art Gallery of NSW is curating a cinema series (Cinema ’68) from “a year that shook the world”.  Dan Potra’s designs place the action and characters squarely in the time period.  The stage is wide, grey with cobblestones, high with lamplights and with an elevated upstage to evoke an attelier above it all.

There is an after-riot of burning cars, a chimney pot where the smoke changes colour with the content of the burning manuscript,  a scene-setting video screen up right and a superbly realised oversize window, centre piece to the garret.  Onto this window are thrown images and video that support the emotional work of the artists.  There is Frug on the stage and Dylan blowing in the wind that coats the audience in foam snow at interval. The costumes glory in patterned tights and mini skirts and patent leather boots and Mimi’s pink hat is sweet and French.

Mimi as played by Julia Maria Dan is breathtakingly vulnerable and sweet. Her voice soars early with Sì, mi chiamano Mimì and her Donde lieta uscì is replete with loss and desire, the “false flower’ notes weighted to reflect the video imagery of the slow bloom rose that appears as her leitmotif.  Ho-Yoon Chung also brings the depth of sorrow to his role as Rodolfo, his world-weariness evident from the opening.  Chung infuses Rodolfo with the interior conflict that makes him afraid of love and fearful of loss. His Finalmente! is bold and believable while engaging the audience in the turmoil of his decisions and his shock at being overheard carries beautifully.  The final duet Sono andati? brings the two voices together in a heartbreaking blend that requires no surtitle reading.

Counterpointed are the brash and vibrantly alive performances from Samuel Dundas as Marcello and Julie Lea Goodwin as Musetta.  Dundas gives us the loyal friend and jealous lover, Goodwin the flirtatious belle with a heart of gold.  His O buon Marcello, aiuto! with Mimi is compassionate and powerful: as is his duet with Chung O Mimì tu più non torni where the voices bristle with the feelings denied.  Never still, Dundas commands the stage when in full flight and Goodwin grabs and holds the audience with a superb rendering of Musetta’s Waltz (Quando men vo)  in a spectacularly engineered silver frock.

Here, Morton has Marcello with his back to the audience as Musetta holds all eyes with a blurred, red-gold haired closeup exacerbating her allure on the projection behind.  It’s just one of the beautifully staged moments that make the narrative so interesting.  The street scene of Act II is busy and filled with small stories; like the naughty children, played by adults.  While I might have missed the vocal lift of children’s voices, the entry of Parpignol (Simon Gilkes) is the kind of spectacle that one desires of Handa Operas.  And the Opera Australia Chorus are second to none.  I worked on many La Boheme’s over my nearly 20 years with OA and never tired of that hit of sound that comes with Aranci! Datteri! , even in the rehearsal room, or the aural complexity of Ecco il tambur maggiore!

But there is intimacy too.  At one time during the famous duet, Rudolfo and Mimi, O soave fanciulla, the lovers are separated at either ends of the stage and the moment feels cold and distant until they move toward each other as the red nebula on the video wall pulls them, each into the other.  This is also true of Vecchia zimarra.

Richard Anderson is Colline and Chistopher Hillier is Schaunard and they are great characters, fun and energetic.  The final sequence of Act II, with all six plus a very funny John Bolton Wood as Alcindoro, never fails to impress.  Schaunard is in a salmon pink three piece suit that seems to have had puppies that were given to the rest of his ragtag bandmates and Colline’s worn and loved op-shop coat is to be sold for medicine for Mimi.  Anderson  is marvellous as his aria praises the “faithful old garment” in a staging that allows him the separateness of a small grief inside the heartbreak of Mimi’s failing, fading light.

And it is also a small chance to luxuriate in the orchestra.  LA BOHEME  has its detractors, some who find the music too light but the Opera Australia Orchestra under the baton of Brian Castles-Onion is rich and lush and filled with romance of Puccini.  The harp is inspired, the strings ascendant and the brass and percussion tightly controlled.  The build to the cymbal crash near the end of Act II is just delicious and there is a rather long scene change, three into four, where one can just sit back and embrace the music.

It’s a special moment in a night of spectacle and surprises.  We are such a lucky city in so  many ways.

Handa on the Harbour’s LA BOHEME is playing until April 22.

One thought on “Fire and Snow at ‘La Boheme’: Handa Opera on the Harbour”