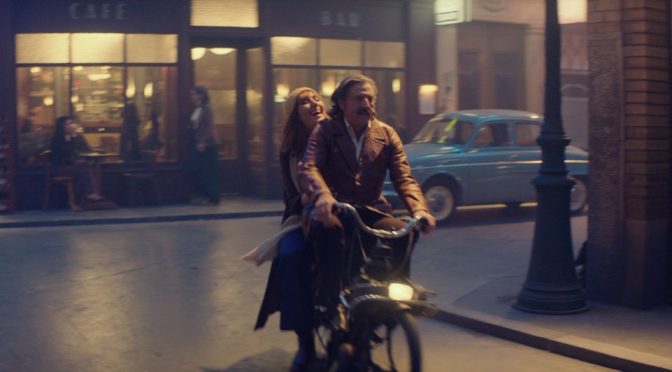 I first saw LA BELLE EPOQUE at the opening of this year’s French Film Festival. So enchanted with it, I wanted to see it again. Much like a theme of the movie, it was lovelier the second time around.

From the start, LA BELLE EPOQUE plays divertissement with fact, fiction, reality and illusion, past and present converging, in a crazy retro-fit curtain raiser. You may wonder if you are at the right screening!

From there, LA BELLE EPOQUE is like a film version of the pina colada song, with a hint of Westworld and The Truman show, wherein 60 something artist, Victor, travels back in time via a role playing service to the place where he met his now estranged wife, Marianne.

The evocation of the time and place is exquisite and although Victor knows it is fake, a set populated with actors, such is the detail that it triggers a suspension of disbelief and he succumbs to the fantasy.

Complications ensue when Victor falls for Margot, the actress role playing Marianne, who is going through her own tumultuous love affair with the director of the service, Antoine.

The creation of the nostalgia zone is another triumph of the film, a superlative production design by Stephane Rozenbaum, bolstered by a costume design by Emmanuelle Youchnovski, both blessed with a gorgeous eye for detail, suffused with the sublime cinematographic lighting and framing of Nicolas Bolduc. Eye candy sustained by emotional and intellectual nourishment, with a healthy dose of hearty humour.