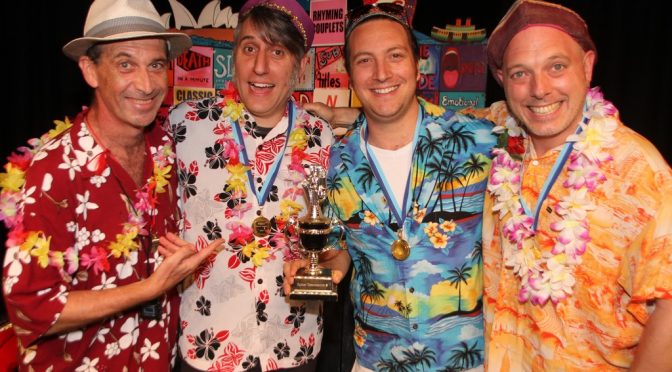 More laughs than you can poke a shtick at…more colours than you can put in a rainbow…more clowning than you will see at a circus…yes, it was all happening folks last night when Kosher Theatresports 2017, with the umbrella title Surfin’ Safari On The Chai Seas,played to a near capacity house, including a few Rabbis, at the Bondi Pav.

Three judges, each well versed in all things theatrical, Lyn Pierse, known as the Godmother of Australian Theatresports, cabaret artist and performer Joanne Weinberg and actor and director Tanya Goldberg, held up their scorecards- marking the performances from one to five with five being funtastic,

Overseeing all the frivolity was the zany emcee Ewan Campbell and an ebullient Geoff Sirmai was the all important timekeeper.

The skits ran fast,furious and funny and before you could say ‘Find Your Ending’, the show’s had indeed come to a close. The winner of the coveted Kiddush trophy were Surfin’ Sephardi, decided after a hilarious tiebreak.

In the other award categories,David Callan won Best and Fairest, Adaya Turkia was Rookie Of The Year, and Moment of the Match was won by the Judah Maccabeach group’s skit ‘Death and Resurrection by Meds’.

Actually, on the night, everybody was a star, from the zany performers, to keyboardist Benny Davis’ wonderful musical accompaniment, to Daniel and Clem running back and forth across the stage throwing missile lollies and chocolates into the audience, and to the lighting man working hard up the back, Daniel O’Shea.

Kosher Theatresports, you were absent too long – some three years- make sure that you come back again next year.

All photos by Ben Apfelbaum (c).

One thought on “KOSHER THEATRESPORTS 2017 : MORE LAUGHS THAN YOU CAN POKE A SHTICK AT”