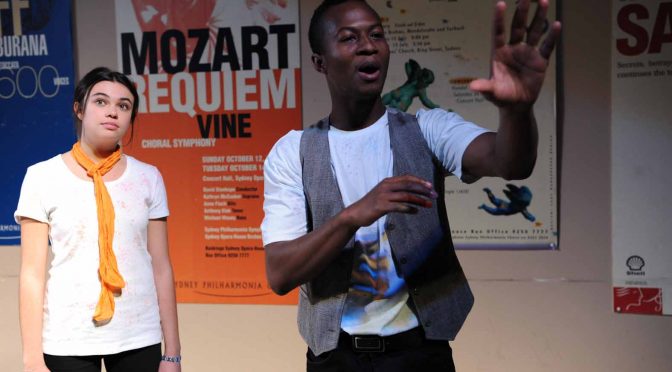 KISS OF THE GALLERY GUARD has a sweet story at its heart and it includes some really enjoyable live piano before and as mood setting between scenes.  Playing at the Sydney Philharmonia Choirs Hall at the soon to be renovated Walsh Bay Arts and Culture Precinct, the show had a late cast change when one of the original actors suffered an accident.  With the generous support of  two new male performers to fill roles, the show has gone on.  It may not have found its feet on opening night but it’s evident the cast and crew have put in a great deal of work to get it to this point.

The story revolves around Amber, an escapee from a small country town, now in the big smoke looking for adventure.  She quickly lands a position as a gallery guard at AGNSW and meets a range of people in her first few days on the job, from line manager to patrons.  Amber is also in the right place at the right time when an adventure comes her way.  This will allow her to trade up and we will follow her as she takes on the world with good humour and a willingness to learn.

Amber is played by Cara Severino and there’s credible small town attitude in her creation.  If the script by Carol Dance does require a significant initial suspension of belief to accept the paucity and poor calibre of Amber’s training, the episodic nature of the text is reassuringly familiar.  And the linear travel of the story allows for the considerable enjoyment of Philip Eames on piano during the changes which could otherwise feel a bit protracted.

The other female roles, seven in all, are taken by Chloe Schwank and Amber’s journey is reflected in these interactions.  The five male roles are created by Jesse Northam who has the task of bringing four of them to the stage, and Justin Amankwah as love interest and kisser of the title, Charles.  The cast interact with warmth and Severino is especially focused.  This is evident in her ability to hold  the audience’s attention when alone and contemplating the invisible.

Though the large posters for APC cover the upstage walls, the Roberts and Miros and ancient Greek statues are all in our imagination.  There are some quite comic references to them in comments about style, particularly the Surrealists, and artist names.  Dali is a hard one to pronounce if you have never heard it before.  There’s a clever modern art reference in the Pollock-y T shirt costuming too.

Director Murray Lambert has obviously pulled his small team together well for KISS OF THE GALLERY GUARD to be executed so smoothly.  However, there was a flatness and lack of spark in the production tonight and some of the dialogue was lost to rushed or too soft delivery. But Amber’s story is interesting one and there is an underlying theme about honesty that serves to engage the audience.

Scene Theatre Sydney’s [Facebook]   KISS OF THE GALLERY GUARD  continues at various times until May 26th.