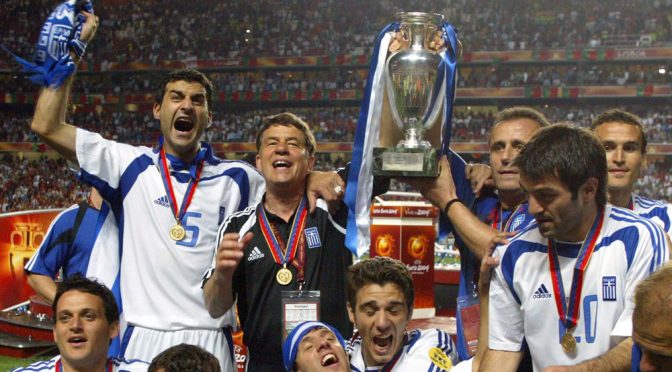 KING OTTO features a rich combination of two of my favourite things; a love of soccer, which goes back to childhood – thanks to a soccer loving Uncle, and a passion for true life underdog stories, where people succeed, defying enormous odds.

The underdog in KING OTTO was the Greek national soccer team. The film goes back to the beginning of the 21st century.

Frustrated by the team’s continuing lack of success, Vasilla Gagatsis, the head of the Hellenic Football Federation, decided to try a new approach.

In 2001 he chose acclaimed German soccer coach Otto Rehhagel,  who had a lot of success in the Bundesliga (Germany’s Premier League), to take over coaching the national side. Vasilla thought that maybe some German discipline might drive a team of players who were more interested in socialising and living the good life.

To begin with, Otto’s results were disappointing. For instance, his team were smashed 5-1 by Finland in a friendly.

Otto reflected that part of the problem was the language barrier. He couldn’t speak a word of Greek.

He went searching for a solution to the problem. He found it in an ex national team player Ioannis Topalidis who spoke both Greek and German fluently. He signed him up as his assistant national coach.

Now Otto had a ‘soccer mind’ he could talk to, and who would act as a bridge to his players.

Topalidis found Otto’s instructions too harsh and he sugar coated them a little, or more than a little, when he passed them on to the players.

The players responded well, and the team started winning. They won entry into the 2004 UEFA European Cup finals. They started the tournament at 300 to 1 odds, and had never even won a point in previous finals.

They ended up winning the tournament beating teams like France who, at the time, had genius players such as Zidane and Henry.

Yes, truly the stuff that dreams are made of…

Out of which, New York filmmaker Christopher Andre Marks, of Greek and American descent, and a graduate of New York University’s Tisch School of the Arts film program, has made a dream of a doco.

In many ways KING OTTO was a typical sports documentary. The film provides some background to Otto Rehhagel’s life such as early photos and where he grew up. It features extensive interview material with its affable, intriguing subject, Otto, as well as interviews with some of the team’s key players.

There are extracts from some of the press conferences that Otto gave through the tournament, most notably when he told journalists that he would never discuss tactics that he used in a match with them!

There was also superb footage from every game that Greece played during the finals.

All good stuff but what lifted this film above most sport docos? A few theories…

I loved the film’s fervent patriotism. Of Greek descent he did his utmost to make the best film that he could about one of the greatest ever Greek sport stories. The Greeks are a passionate race and their passion really came across in the film…The scenes in Greece after they won the tournament, like the shot of a Greek boy riding on top of a car with a Greek flag, were priceless!

KING OTTO poignantly captured the wonderful friendship and mutual respect that developed between the coach and his assistant which the film infers is still current today. They did, after all, go on quite a journey together.

Marks’ film explored the notion of two very different cultures – the strict, regimented German culture and the easy going, very sociable Greek culture – finding a common ground in the pursuit of excellence in the sporting arena.

This film delivers a perfect strike, straight into the back of the net.

KING OTTO has been brought to the big cinema by Umbrella Entertainment.

KING OTTO opened in cinemas on Thursday 27 May 2021. The cinema locations in New South Wales which have screenings of KING OTTO are:-