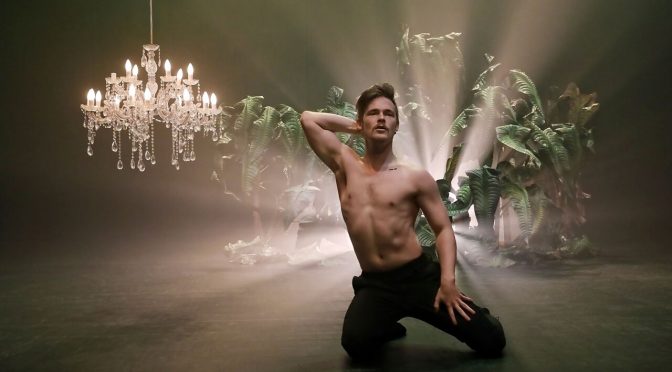 This latest work from one of Australia’s most highly acclaimed contemporary dance companies builds on Shaun Parker & Company’s reputation for combining hard-hitting cutting-edge choreography with theatrical invention and striking soundscapes.  The Guide had the opportunity of asking some questions of Shaun Parker.

SAG:           The setting is two parts, cocktail bar and jungle.  How does the name of the show, KING, sit inside those two places?

SHAUN:    The set design is part cocktail bar, part jungle.  The men are dressed in dinner suits, complete with bow-ties pomade-slicked hair, and polished black shoes.  Only the cocktail singer is dressed in a deep wine velvet jacket, which sets him apart from the other men.  He has a seemingly otherworldly quality, possessing a gender neutral essence, and as he sings he becomes a puppet-master for the suited men beneath him.

This universal society of men seem to be arriving at a strange party where only the supposedly powerful and elite dwell, where chandelier and jungle foliage exist side by side, and whereby this unusual society manifest their purpose.

SAG:         The music is a collaboration with artist Bulgarian Ivo Dimchev, how did that artistic pairing come about?

SHAUN:    Ivo Dimchev is a remarkable vocalist and songwriter from Bulgaria, who began his career as an actor, dancer and theatre maker, and who discovered only five years ago that he could write songs!   His voice is incredible – If Roy Orbison and Freddy Mercury had a love-child, then that would be Ivo Dimchev!

I first discovered Ivo about five years ago just as he began his singing and songwriting career.  Ivo was making performance art and theatre works featuring his singing, and because we have mutual dance friends in Europe, some of his singing popped up on social media.  I was immediately transfixed, and I simply had to keep watching his work online.

I was a counter-tenor myself having sung a lot of Early Music repertoire, as well as more modern works, so I was fascinated by Ivo’s extensive vocal range, which can soar to epic heights, as well as dropping to soothing and seductive lower tones.  Five years later, without even planning it, it dawned upon me that Ivo Dimchev would be perfect to create the music and songs for KING.

I wrote to Ivo and he initially said ‘no’ because he does not work for other companies, but he suggested I send him some video of rehearsals to take a look at.  The very next day he wrote back to me and said “ I love it!  Let’s do this!  What’s next!”   So I was very excited that he could collaborate for us!

SAG:       The role Ivo plays involves vocal narration in his counter-tenor voice, often associated with castrati and in contrast to the perceived masculinity of bass. The metaphor of the work is extended by this I imagine.

Ivo’s counter-tenor voice is stunning, and his theatricality on stage is mesmerising.  Every cell in his body embodies his voice, and every note he sings embodies his physical presence.

Having an androgynous male storyteller was very important for me – he feels almost male and female, or what we perceive these genders to be.  It is really interesting because as Ivo creates this ‘kingdom’ beneath him, the nine males onstage almost become theatrical pawns in telling this story.  Some of it is very brutal, and some of it is very funny as it reveals and interrogates the notion of toxic masculinity.

A colleague recently attended rehearsal and after watching she proclaimed “ Ivo’s beautiful voice is the caramel, and the bodies of the men are the salt!”  I thought this was a very apt description!

SAG:             And having a female dramaturg in Veronica Neave, who has a remarkable background, must bring a different eye to the creation.

She is a brilliant actress and has created many self-devised works, winning awards globally.   Her love for instinctual, universal storytelling always helps me to tease out the juicy bits of human behaviour found in the work!  How can you belly laugh one moment and then be moved to tears in the next moment?

I suppose, like me, she is not afraid to rip out the guts of humanity, and place it on stage, in a delightfully entertaining, yet sometimes disturbing package!

SAG:          KING is not just a performance is it?  There’s a project around the work designed for skills development of LGBTQI  performers.

SHAUN:     I am leading a mentorship and skills development program for ten LGBTQI artists including dancers, actors, burlesque performers, singers and writers called QUEER BITES that will take place during KING, and will continue throughout 2019.

I am really looking forward to this, we will be working closely together on creative material, with additional opportunities going into 2020.  It is going to be really inspiring, and so important to give our LGBTQI artists a platform to grow and develop.

SAG:    And touring the show is next I believe?  How do you look after yourself and your company given how physically demanding your shows usually are.

SHAUN:    Yes we are touring KING overseas following our world premiere season at the Seymour Centre as part of the Mardi Gras Festival.   I can’t wait to see how the show resonates internationally.

My dancers are really excited to perform this show and tour it overseas as well.  The dancers and I have loads of fun which is important when doing such a physical and immersive show!  We train every day in yoga, dance and contact improvisation to keep ourselves fine-tuned and show-fit!