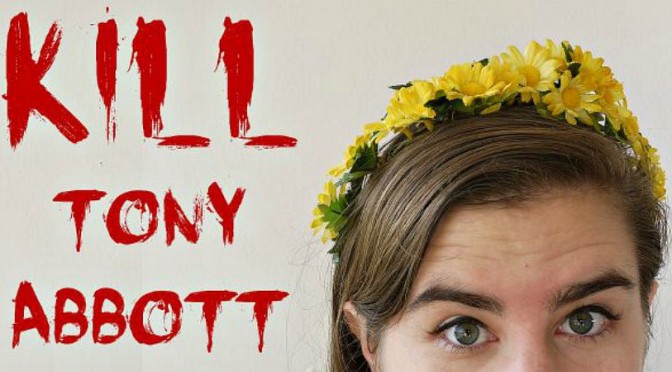 Dominica Duckworth is presenting her new stand-up comedy show  KILL TONY ABBOTT (a stand up show, not a suggestion!) as part of this year’s Sydney Fringe Comedy Festival.

In a colourful and varied career so far Dominica has performed with the Australian Theatre For Young People, participated in the Caravan Slam, is a former Raw Comedy heats finalist and currently holds a day job as a high school English teacher.

Dominica describes her show as an hour of lefty stand-up and which she claims is guaranteed to make us laugh about how guilty and alienated we have become!

Theoretically rigorous and furiously politically correct, she says her show will be the only show at this years’ Fringe to ask these important questions: Why does anyone like Woody Allen? Why are grocery store jingles so sad? And how is it that Australia has never even tried to kill one of our Prime Ministers? Not even one?

The show will be performed at the Container at the Factory Theatre, Marrickville on the 29th September, the 1st October and the 3rd October. Tickets are $12 full and $10 concession. For further information visit the Sydney Fringe Festival official website- https://www.sydneyfringe.com/

Sydney Arts Guide has one double pass to give away to the show on Saturday 3rd  October at 9.30pm. Be the first to email- editor.sydneyartsguide@gmail.com.