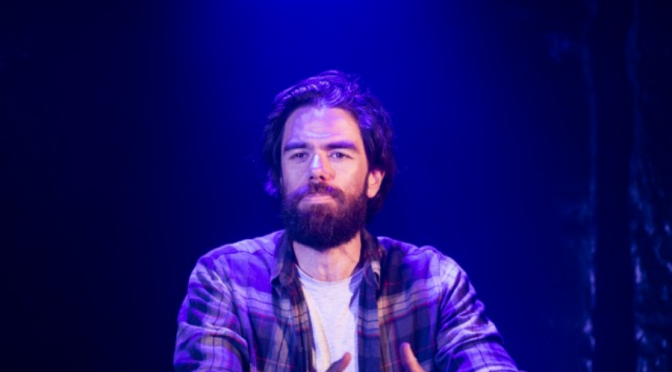 “There might even be some in the audience.”  A Climate Denier.  Or me, with concerns about guns on stage and sceptical that a play pulled from production by immense pressure in 2014 might suffer from its own reputation.  But pressure has its uses.  It forms diamonds in the mantle and spits them up by force.  Compression also provides a suitable pressure cooker to take old art and make it new.  This is KILL CLIMATE DENIERS Mark 2018.  A new work forged from the never seen to arrive brilliant and faceted on the Griffin stage.

Gwen Malkin is the Minister for the Environment and is clueless.  Luckily, she has a handler, Georgina Bekken, who is only slightly more competent but a little is enough, who will constantly invent deniability for her boss.  Add in the terrorists, led by Catch, who will take the audience hostage at a concert in Parliament House .  Thereafter to demand something … something undeniably ludicrous and climate change related.

New and old, a creation begins with an idea, a notion, an impulse and so we meet the playwright, David Finnegan (Eden Falk).  He will be our guide, interjector and interlocutor, as we experience the play as was and as is, what happened and what he expects to happen.  The background? KILL CLIMATE DENIERS 2014 had some funding from the ARTS ACT.  The name was enough for decrying.  Furore created, production killed.

Falk is energetic and wry and roams the stage watching and explaining his play.  His sincerity is deliberate and detailed, after all he knows past and future both.    As Minister Malkin, Rebecca Massey, has an energetic physicality that is just thrilling to watch.  To create warmth and presence in a character so broad is exciting to experience.  And she has a terrific scene partner in Sheridan Harbridge as Bekken, who simply doesn’t think anything unless it appears on her face in a disarmingly venal display of spin spun badly.

Lucia Mastrantone as Catch brings that true believer anarchism to her character and plays Catch’s humourlessness straight especially in some of the clever, twisty text with a fellow terrorist, well played by Emily Havea.  The writing is thoroughly entertaining: sometimes laugh out loud, sometimes with a slow burn quality to enjoy later and sometimes with an excitability and speed that sweep you along its trajectory.

It’s a busy show which includes out-of-story elements like cinematic and small screen directions and the extraordinary use of music.  As a techie, I am hardwired, CAT and HDMI switcher, to love these superbly conceived and operated production elements. 6 projectors, screens and throws, lighting to thrill, not even mentioning the little dots on the forehead of the front few rows.  My companion, being younger, knew more about the music and explained it to me later.  Perfectly placed she said of the choices but what I know is that it is brilliantly used for mood and punctuation.   Amethyst purples, compete with garnet reds and peridot greens to give the lighting a dynamic and bold primary solidity.   (Designer: Jonathan Hindmarsh, Lighting Designer: Trent Suidgeest, Sound Designer: Steve Toulmin, Audiovisual Designer: Toby Knyvett)

Add to this conglomerate of coherent elements, Director Lee Lewis’ tight control over a thumpingly busy show and KILL CLIMATE DENIERS becomes a new creation which is intelligent, funny and politically savvy.  The conceit of which works brilliantly, not least because the writer character, that’s a weird phrase, is so bloody likeable.

I can’t speak for the Climate Deniers in the audience but I can speak as a sceptic now denied.  Which leaves a concern towards the implications of being in a room with well-constructed violence.  Here is where the writing shows its inner beauty by faceting the story with a change of pace.  What we get is a ramping up of the narrative with an allied arching of the characters to create that Brechtian distance which engages the rational.  No longer blinded by the brilliance of the creation, we have its truths and delusions to muse upon.

KILL CLIMATE DENIERS is playing at Griffin until April 7th.