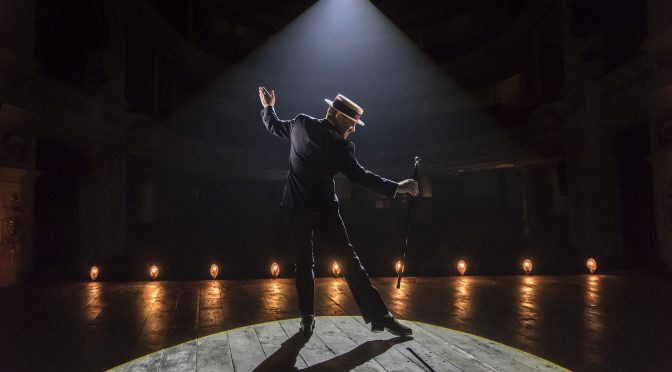 Filmed at the Garrick Theatre, this is an emotionally compelling, raw and gripping production that has just closed in London. It is the last of the season of the Kenneth Branagh Company performances.

Branagh follows yet again in the footsteps of Olivier in taking on the iconic role of Archie Rice, the fading ‘comic’ music hall star.

When Osborne’s THE ENTERTAINER was first produced in 1957, it had great impact, similar to another of his play’s, Look Back In Anger.  We see England, after the Suez crisis, a declining power, wistfully reflecting on its former Imperial glory. This now resonates with contemporary force with the Brexit debate.

THE ENTERTAINER is at its strongest when the playwright vents his spleen. The family arguments have the piercing intensity of a Tennessee Williams or a Eugene O’Neill.

As designed by Christopher Oram we are in a bedraggled theatre. The halcyon past of a seaside resort are seen in one dimension, evoked by a fading travel poster. All the action is framed in a tarnished gilt proscenium arch; theatrical and domestic scenes fluidly interchange.

Branagh as Archie Rice gives a bravura performance. We see many sides to Archie; the suave sophisticated musical hall artiste on stage, the charming cad and serial womaniser, and  and the broken, tired and haunted man terrified of being a mediocre failure who is ‘dead behind the eyes’.

He is nimble in his light-footed tapping and twirling, in tuxedo and bow tie, with a flick of the wrist and his quicksilver tongue, he is full of vibrant, dangerous mischief. Some of the innuendo –laden gags performed with a determined smile now seem excruciatingly cringe worthy and verge on the offensive, including some misogynistic  lines, some blasts  against the Poles and the Irish and some jingoistic songs.

Archie can be seen as a Shakespearean anti hero character, aneathetising his slow spiritual death with nostalgia, drink and humour yet still full of distinctive aplomb and seedy magnetism. We do get to feel his hidden self loathing and desperation.

Sophie McSherra was excellent as Jean , Archie’s rather brittle idealistic daughter, strong willed, recently politicised and trying to make more of her life.

As her half brother, pacifist Frank, handsome Jonah Hauer-King, is tremendous. We see his confusion and pain, and his attempts to protect Archie.

Greta Scacchi plays Phoebe, Archie’s put upon wife, who is weary and is descending into a life of soddled drunkenness. She has been searching for something more from her life however circumstances intervened and she now sees herself as being past her best. A victim of class snobbery and infidelity she is now stuck in the provinces and looking after Billy Rice.

Billy Rice, Archie’s father, was magnificenly portrayed by John Hurt. He is now old, frail and doddery but still has a twinkle in his eye, and is wonderfully full of Edwardian staunch pride.

A socially and politically charged study of the mediocre middle class unraveling under the weight of their own failures, this is, atleast for the time being, the last Kenneth Branagh Theatre Company production  to take place at the Garrick Theatre, and the last play in which Branagh will star, for the time being.

Running time 2 hours 45 including one interval. There is a short documentary placing the show in context before the performance and an entertaining historical questions screen at interval.

THE ENTERTAINER screens at selected cinemas 17-21 November. Performances at the Garrick Theatre in London closed on November 12 .