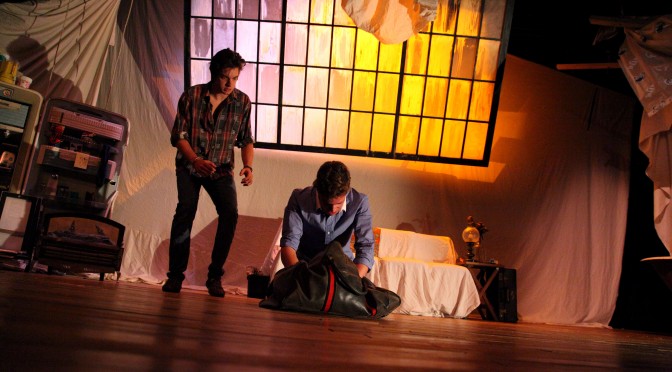 Sex. Lies. Art. How far would you go to achieve your dreams?

A blistering contemporary tale of love, twisted morals , deception and intrigue, Keith Bunin’s (The World Over, The Busy World  Is Hushed) THE CREDAUX CANVAS originally premiered in 2001.  This  excellent revival, directed by Ross McGregor,  blazes intimately forth from the Reginald at the Seymour Centre.

The play is in four scenes, somewhat cinematic in style, and features a biting, witty script. The work brings to mind other plays about the art world, Yasmina Reza’s Art and David Williamsons Up For Grabs?

Those of us who have been to art school are at home with the ‘art speak’ critique and analysis of paintings necessarily part of this show. Other theatre patrons may struggle a little.

Set in New York 2001, Jamie is the disinherited son of a respected art dealer who, in an inspired act of desperation , convinces his artist friend and room-mate, Winston, to paint his girlfriend, Amelia, in the style of obscure belle époque artist Jean-Paul Credeaux, with the aim to hoodwink art collector,Tess, into parting with a large sum of money.

During the creation of the painting, the relationships develop into a complex romantic and sexual triangle. Dreams don’t always come true and capricious human actions are revealed.

Things tumultuously come to a head when the extremely wealthy and snooty Tess enters their world, to assess the painting before purchase.

Emma Vine’s cluttered, messy set with a glorious skylight instantly says ‘artists live here’ and ‘la Vie Boheme ‘ (we are in a contemporary version of Rodolfo’s freezing garrett, transposed to a New York setting). A feature was the soft drapes hiding the bathtub and back entrance to the bathroom.

James Wright who plays Winston is luscious male eye candy. He is obsessed with the world of painting and , in particular,  Credaux. Wright delivers a tremendous performance.

There is an unexpected dark twist at the end of Scene 3 in the horrible way he treats Amelia . Their meeting in Scene 4 is very awkward to begin with. The double nudity when Amelia is modelling is tastefully presented and in context.

Very handsome Jamie, Winston’s room mate and Amelia’s lover, who sets everything in motion, is well played by Felix Johnson. He has a dashingly exuberant first appearance where he is elegantly dressed in a posh, pencil grey suit and and gives a description of what has happened at the reading of his father’s will.

Underneath his confident veneer, Jamie is deeply unhappy and has always striven for acceptance, particularly from his father.

Amelia, our unwilling, moral model, is exquisitely and beautifully played by Emilie Cocquerel. As for the nude modelling, at the start she is all angular arms, nerves and crossed legs but then she relaxes a bit as she models for Winston.

Carmen Duncan as Tess is exquisitely elegant in black and dripping pearls and silver, every inch one of those ultra refined society matrons who lunch at the best places.

Duncan comes across as a glorious example of a theatrical diva, hijacking any scene that she can, and radiating star quality.

Duncan memorably delivers a witty, sarcastic monologue about how boring the lunches are.

Tess demolishes Winston’s other paintings in a catty art school lecturer/art critic way but she sure does know her stuff.  It is more than a little unfortunate that the trio have picked one of her favourite artists to attempt their forgery!

This play has a vast canvas…it is about disillusionment, death, despair, the dark side of romantic ideals, Gen Y unhappiness and more…

THE CREDAUX CANVAS is playing the Reginald Theatre at the Seymour Centre until the 14th February. Running time 2 hours and 20 minutes including one interval.