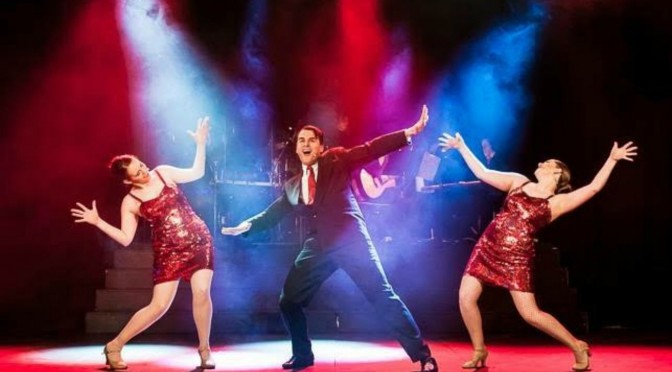 The five piece band on stage led by Philip Eames give good support to the singers and action through pop music styles various from decades past. In the absence of true sets or props, there is something of a mixed-gig feel as each character adds to the show. This production is tight through the changes on stage, and the necessary pace is preserved.

Andy Leonard gives a believable portrayal of Keating’s many dimensions. He is the Bankstown boy come good, complete with suitable charm, sneering confidence and heartfelt humanity. As he addresses policy issues, his vocal lines are challenging, with constant shifts in direction and colour. These are almost always conquered commandingly.

Leonard’s Keating also has great onstage chemistry with the other political players. His famous line to John Hewson “I Want To Do You Slowly” and other intimidations are vividly performed. In this and the less intimate showstoppers, Leonard performs as quite the triple-threat Zegna-suited superstar.

Leonard’s enthusiasm in songs such as ‘The Ruler of the Land’ and ‘The Arse End of the Earth’ is well supported by the ensemble action. We see in this revival dynamic, slick choreography with snappy modern elements from promising AIM graduate Alex Lewtas.

This production owes much to the strength of its cast of character actors who create very watchable political acts. Whether familiar as an audience member with the scandals and parliamentary history or discovering them afresh, the cast’s physical and verbal commitment to storytelling and caricature delights.

Doran Chester’s dual roles of Bob Hawke and John Howard are achievements enhanced by quality visual gags. These are at times a bit prolonged, but the essence of the men and their infamous accents are so accurate that the jokes never fall flat.

Gareth Evans is played with gangly virtuosity by Richard Woodhouse. In ‘The Beginning Is The End’, he warns Keating of the pressures of the top job with fine voice, illuminated by paranoid sneaky torchlight.

By contrast, the inflections of Evans’ duet with a blushing cross-dressed Cheryl Kernot (Sean Curran) show incredible comic and musical timing. This declaration of inter-party infidelity is always a highlight of Bennetto’s musical, and does not disappoint here.

Another unforgettable staged event in this show is the no-holds barred performance by Jonathon Holmes as Alexander Downer in Act Two. Holmes also presents John Hewson in the Act One scenes with Keating, with elastic facial expressions.

This adult cabaret piece, ‘Freaky’ is an exaggeration of the incident in which Downer lost his pants once when overseas. It is stretched for comic effect in Casey Bennetto’s satire. This production takes the scene to new and hilarious levels. ‘Freaky’ continues a solid string of audience participation sequences and shocks us like no leadership poll ever could.

This adult hysteria in Holmes’ hands is arguably the most polished, settled and comfortable act in the show’s gig at this stage.

Lighting design with smoke machine by Liam O’Keefe is colourful, uses a variety of shapes and formations effectively and is suited to the performance style of the musical.

At times some swooping lights in the venue end up repeatedly lingering directly into the audience’s eyes. This can dazzle and is perhaps an effect best reserved for a different event or larger sized space.

This is a bright show in the compact spirit of the original Bennetto musical. It has instantly likeable and singable songs and many multifaceted performances. Comedy elements satirising key political players and processes found in any era are well directed. Unlike a political term, the production never sags throughout.

KEATING! THE MUSICAL WE HAD TO HAVE plays at the Bryan Brown Theatre within the Bankstown Library and Knowledge Centre until Sunday 19th July.

For more about KEATING! The Musical We Had To Have, visit http://www.birdieproductions.com.au