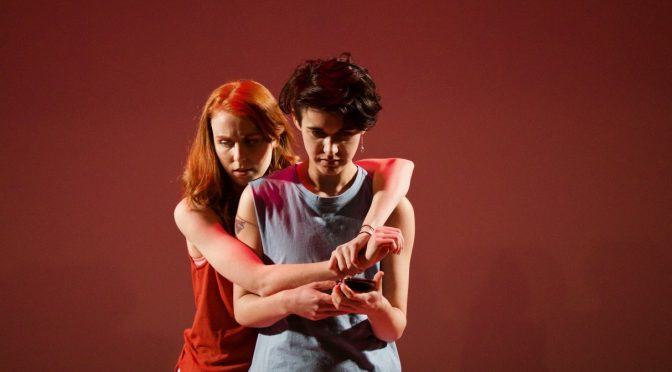 Katie Pollock’s NORMAL is an intriguing nigh in the theatre.

The play is set in an unstated town where everyone is living ordinary lives then one day a young woman Polly develops tics and loses control of some of her body’s expressions and movements much like a person suffering from  Tourette’s syndrome.  She has medical tests which come back negative.  Locals are distraught by what’s happening to  her. By the end of the show other people in the town have developed a similar condition.

There’s a lot to ruminate over with this play. What is it really about? There is no tidy ending and the playwright leaves it up to each member of the audience to make up their own mind. My take is that the play is about young women  who have problems expressing themselves and as a result they develop a  Tourettes like condition, a sign of how repressed they are. They need to somehow free themselves, to develop their own identities.  By the end of the play, Poppy has at least in some ways liberated herself, whilst her friends lag behind.

The production has been tightly directed by Anthony Skuse. The performances are all good.  Alexandra Morgan  gives a .quite remarkable performance as Poppy, with her having to contort her expressions and movements  for much  of the show.

The three other actors play multiple roles as well as being part of the Ensemble.

This play gives a much darker meaning to the phrase ‘shaking all over’. Recommended, Katie Pollock’s NORMAL plays the Old 505 Theatre until the 15th June, 2019. Running time is 90 minutes.