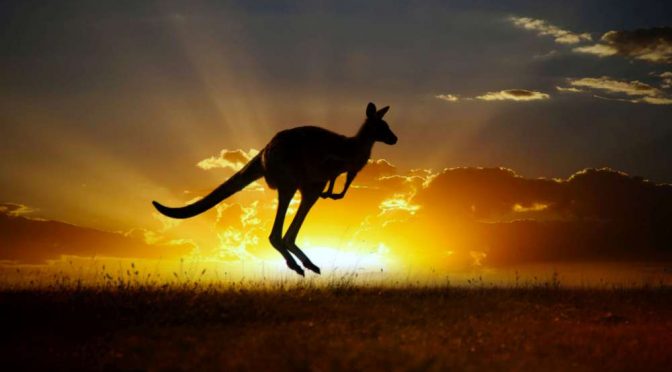 We’re a weird mob, the only nation to have a pest on our national crest, pet food as patriotic symbol.

Opening up the conversation of culling and killing, conservation and commercial interest, KANGAROO is a feature film documentary that leaps and bounds around the paddock of public opinion, political policy, and the myth and misinterpretation surrounding this marvellous marsupial.

Apparently, the kangaroo is the second most recognizable tourist symbol in the world behind the Statue of Liberty. Really? Where does the Eiffel figure? I digress.
The kangaroo is an image that defines Australia to the world. The kangaroo graces Australia’s national coat of arms, flies through the skies with the national airline and is deeply intertwined in Australia’s corporate and cultural identity.

Who could forget the advertising campaign jingle, Football, meat pies, kangaroos and Holden cars.?Yet despite a common perception that they are plentiful to the point of pestilence, most Australians have little idea of the story of the kangaroo and what is at risk, as the film explores the perspectives of environmental scientists, indigenous leaders and government officials as they interact on the international stages of California, China and Russia -yes the Big Red is popular in Russia as a plate mate.

The film explores the perspectives of farmers who see kangaroos as grazing competition for their cattle and sheep, which is solved through shooting or the hiring of commercial hunters. And includes comments from farmers who are anxious to find long-term solution paths of coexistence with local wildlife.

The film shows Kangaroo and cattle, the jumbuck and the jumpers, can co exist. Kangaroo water consumption is lower than that of imported livestock, and their grazing is different.

The film introduces the audience to professional, former and current kangaroo hunters, some who experience long-term trauma from their trade and others who see their work as a key part of maintaining population balance. The film unfolds the cycle of the kangaroo from paddock to plate as different scientists, industry and government representatives talk around the issues of killing wildlife, saving grasslands for agri-business and the growth in international trade of kangaroo parts.

Written and directed by Kate McIntyre Clere and Mick McIntyre and beautifully photographed by Mick, KANGAROO captures the grace and majesty of movement, the economic spring in its step, of this marvellous creature.
These marsupials face mass destruction on a daily basis. Alas, Australians have form that this is what we do to our indigenous.

It’s a wakeup in fright, thinking back to that jingle: The footy might be made of kangaroo hide, the meat pie might have roo meat, and the Holden is extinct. Something that was unimaginable only a short time ago.