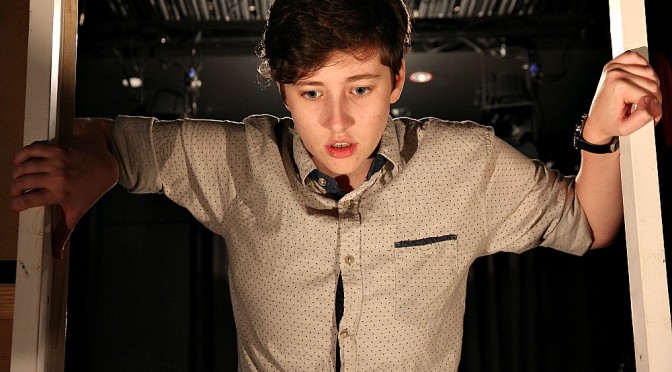 KALEIDOSCOPE playing at the Kings Cross Theatre as part of Mardi Gras is a bit overlong at an hour and a half.  But the question is how did writer Charles O’Grady get the script so short?  There is so damned much to say.  And … how often do we hear an authentic voice on the topic.  Educated, well-meaning individuals like me might have a point of view on Benedict Cumberbatch in ZOOLANDER 2 or THE DANISH GIRL but how often do trans people have their own voice in the Arts?

We meet Gabe in bed and not happy about the alarm going off.  We all know the struggles of getting out in the morning yet most of us are up and attem and on with the day eventually.  Despite his cheerful whistling of Beautiful Dreamer, for Gabe the struggle continues after rising.  In the act of dressing, his confidence is undermined by his perception of his appearance.  Hands too small, face too round, voice too high. Personally I’ve always hated my … we all have something!

With this clever script device, O’Grady encourages his audience to empathise with Gabe.  And the early belief in his truth carries with us through the piece.  Gabe knows that he does not appear male enough for acceptance and does an “awful job of passing” and his points of confusion are also ours.  It will be easier to accept him when he is clothed … a tie will help.  Something severe, manly but sadly as Gabe lays his shirts AMERICAN GIGOLO style on the bed, we vaguely understand that it’s not going to help.  Then in a very neat directorial manoeuvre, he rolls up a short sleeve and the man does appear before us.  Clever.

Similarly effective is Gabe’s discussion with the other side of the looking glass.  It allows for question and answer and an insight into the negative self-talk that rages within him even as the storm on the soundtrack threatens outside.  His clothes are spread around and are dirty, lost or wrong.  The words repeat … embarrassed, unworthy. Shame is there too.

Some of the ideas are also repeated and this is part of my issue with the length.  I hope that there is a dramaturg with experience enough to work with Montague Basement on the text.  Yet it’s important to see the work now, in its nascent stage, before it becomes the full blown successes it is bound to be.  The bedrock is there in the layering added and the metaphor of donning does resonate in the text.

This leads to discussion of the actor playing Gabe, Oliver Ayres.  It’s a wonderful thing to watch this artist.  It’s not worthy or heartfelt or uplifting or any of the cliches around great performance.  It’s a man.  He’s real. He’s witty and happy and tortured and seeking all at the same time. There is little in the text about what came before his transition but Ayres brings it all onto the stage with him. There are few questions to ask about before once we spend time with him.

We meet Gabe in the extended silent scene of his rising and Ayers’ work is crafted beautifully.  Each movement natural yet absorbing.  He speaks slowly at first and then he gets cross about what happened last night.  His rapid-fire anger is exactly what we feel when badly done by and he has just won our hearts.  We will happily follow him to the breakdown that will break our hearts in a finely measured acting tour de force.

I felt his reality so strongly that I came away from the performance angry.  Is this really what we do?  Is this how we make trans people feel?  It must be because trans people have just told me so.  This is where the Director’s Notes are very useful.  Perhaps my crankiness might have been about Gabe himself?  He’s just a man not a figurehead or role model.  Just a creation pulled off the page.  So my reaction to the piece needs further thinking on.  And that is the real transformation happening in here. This is how the work will change me,  even if I don’t yet know exactly how. This is theatre for the ages.

KALEIDOSCOPE continues as part of the Mardi Gras Festival until Friday March 4th at the Kings Cross Theatre.