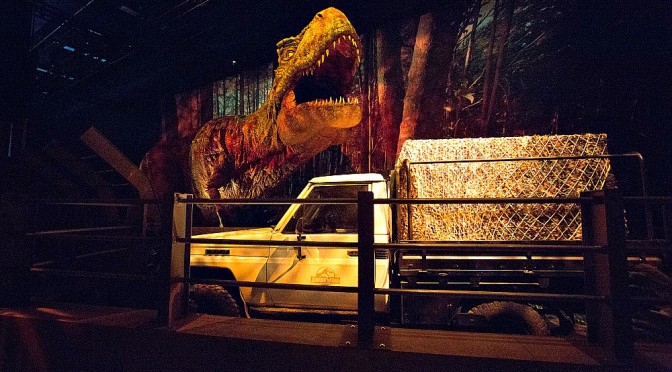 In 1993, Steven Spielberg amazed audiences around the world with the epic blockbuster that was Jurassic Park based on the based selling series by Michael Crichton. It was the highest grossing film of all time up and until that point, taking in over $900 million at the box office. Its stunning visual effects, scenery and CGI dinosaurs leaping across the screen were breathtaking. A successful billion dollar franchise followed and now Jurassic World: The Exhibition, a touring exhibition show that is open at the Melbourne Museum in time for the school holidays and Melbourne is the first in the world to see it.

The theme park exhibition that took nearly 8 years in the making or 65 million as jokingly said by the Imagine Exhibitions chief executive Tom Zaller, is structured as a walk through tour of Jurassic World’s fictional dinosaur island Isla Nublar. Animatronic dinosaurs such as a Brachiosaurus and a Parasaurolophus, Pachyrhinosaurus Sr come to life, terrifying and entertaining visitors with their roars, prowling and creeping up close to audiences in the darkened room and even pushing a car over as seen in the movie.

The animatronic dinosaurs were created by Melbourne’s own robotics wizards at Creature Technology Company who also did the creations for the live arena shows Walking with Dinosaurs, How to Train your Dragon and King Kong.

There’s a lab with artefacts, fossils and real dinosaur bones, microscopes, interactive games and information video screens all filled with fascinating facts about the creatures.

“Everybody’s seen the dinosaur bones at the museum,” Tom Zaller tells The Sydney Arts Guide, “the cheap animated dinosaur things, but if you’re going to Jurassic World, it will blow your mind.”

Ty Simpkins and Nick Robinson, the main stars in the most recent Jurassic World film were also in attendance at the media launch.

Both children and adults will love and marvel in awe and danger at Jurassic World: The Exhibition, now open at Melbourne Museum to the public until 9 October 2016.