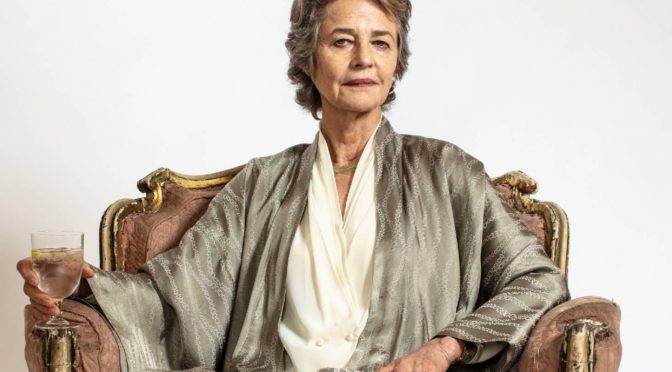 Rampling rampages through a family reunion, forced by a fall to move in with her widowed son and his suicidal teenage son. Dad and son are emotionally estranged and granny is just the kind you want to feed to a gator.

Demanding, domineering the complete antithesis of the doting nana, Rampling’s Ruth is a ruthless old bitch railing against the loss of youth, and in the raging of that not so good slight, finds it, literally, in her grandson, Sam.

Ruth had been a distant mum to her son, Robert, but in a generation jump she bonds somewhat more with her grandson, Sam, lowering the emotional drawbridge she had raised with her own spawn.

The journey is a thorny one, though, and sentimentality is not allowed to flower. As a patient, Ruth lacks patience, cranky and spiteful to family and her nurse, Sarah.

The surly seventeen year old locks horns with the self centred septuagenarian at first, but the exoticism of her past as a photojournalist in far flung war torn countries and the inherent wisdom of a life lived large seeps and spreads into Sam’s life experience, sparking something of a mentor ship, a familial flowering.

Far from being Rampling’s most robust role, her juniper berried portrayal of a botanically pickled and prickly antagonist has a certain ruined majesty.

Márton Csókás gives a cold flinty performance as the emotionally snuffed Robert and George Ferrier takes on the conflicted Sam, with Edith Poor making a notable motion picture debut as the put upon nurse, Sarah.