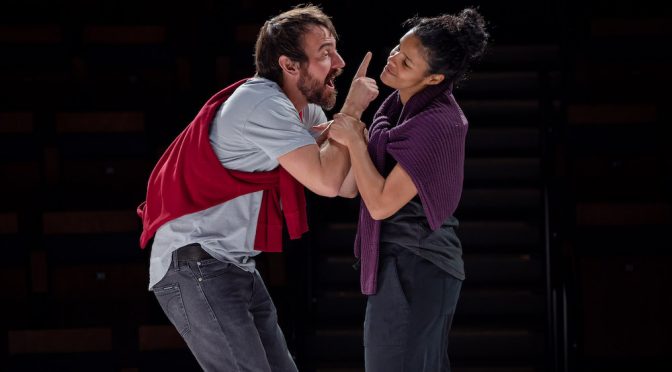 Please, don’t read reviews that explain how Sydney Theatre Company has staged ‘Julius Caesar’. Please, don’t let people who have seen it tell you what happens. It would be better to enter the Wharf Theatre knowing very little so that you will enjoy the surprises and immerse yourself in the creativity of director Kim Williams and his team. This is a creative, sometimes funny, often inventive, unique night of theatre.

For the Shakespeare purists, you, too, will probably immerse yourself in the magic of STC’s rendition of Shakespeare’s take on power, moral corruption and democracy. It would be a very closed-minded purist who would object to this production, because this ‘Julius Caesar’ is true to of the text (albeit truncated), powerfully acted and deeply connected to the here and now.

For those who may dread a Shakespearean tragedy’s murders, blood and angst, and therefore decide not to go, please fear not. Yes, there is blood, but it is soon vanquished by surprising theatrical techniques that make the audience forget the gore. This ‘Julius Caesar’ includes humour that sometimes provokes laughter from the audience.

For those of you wondering if teenagers should go, yes. Why not? They read the History plays in high school and are likely to have been bored to tears. Shakespeare was never about reading the plays. It was about watching them. Teenagers seeing this STC production may well become devotees of the Histories. This show tells the story of Caesar as well as the similar story of power grabs from the first Pharaoh’s court conspiracies 3000 years ago to right now. Teens would like that. After all, they face the future.

The Wharf space became theatre-in-the-round, employed with such precision that the audience always sees and hears the actors. The three actors are:  Geraldine Hakewill, Ewen Leslie and Zahra Newman (incredibly) playing all the roles seamlessly. Director is Kip Williams, designer is Elizabeth Gadsby, lighting designer is Amelia Lever-Davidson, composer and sound designer is Stefan Gregory, video designer is David Bergman, and dramaturg is Courtney Stewart. Congratulations to everyone on the team!

Please don’t find out much more about the production. Just walk into the Wharf Theatre and be ready to be amazed.