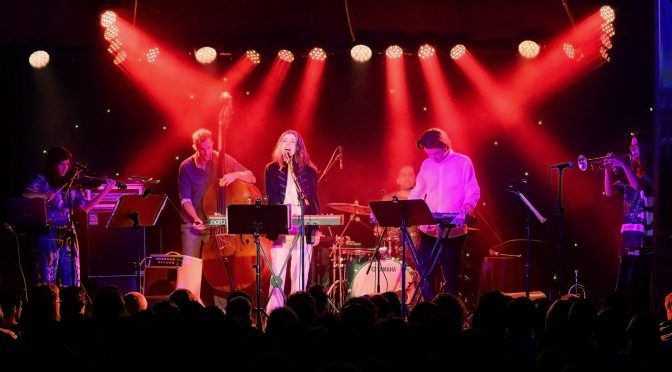 Performing in the spectacular Spiegeltent, Julia Holter’s ambitious post-rock music reflects on the turmoil and disharmony of a post truth world. There are moments of extraordinary beauty in her and the band’s performance but she is quick to subvert the melody and introduce tension and discordance. The overall sound is an intriguing mixture of pop, classical and dissonant music.

Her ethereal voice is employed as another instrument and often soars with Dina Maccabee’s violin and Sarah Belle Reid’s trumpet or flugelhorn. Her voice is at times reminiscent of Regina Spektor, Nico or Kate Bush but she has her own style and is quite happy to let her vocals blend in with the other instruments to achieve the sound she is creating.

Julia’s music has been described as melding influences from classical music and baroque to post-rock, 70s pop and folk, and found sound, all held together by her electronic keyboard and delicate vocals. There are also Eastern European folk influences, especially when Tashi Wada is playing the bagpipes.

Julia opened with I Shall Love 2 from her most recent album AVIARY. The show featured various songs from Aviary as well as a few from the more pop orientated HAVE YOU IN MY WILDERNESS. Aviary is the more avant-garde album and Julia has spoken about the poetry inspiring this album and poems transformed into song. The poetry is diminished in the live performance as Julia’s soaring singing does not focus on diction and her lyrics are often swamped by the band’s instruments

The remainder of the talented band is Corey Fogel on percussion and Andrew Jones on double bass. Like the other members they make interesting contributions that can be both majestic and challenging. The versatile Tashi Wada also contributes on synthesizer.

Julia Holter performed at Magic Mirrors Spiegeltent on 20th January as part of the 2019 Sydney Festival.