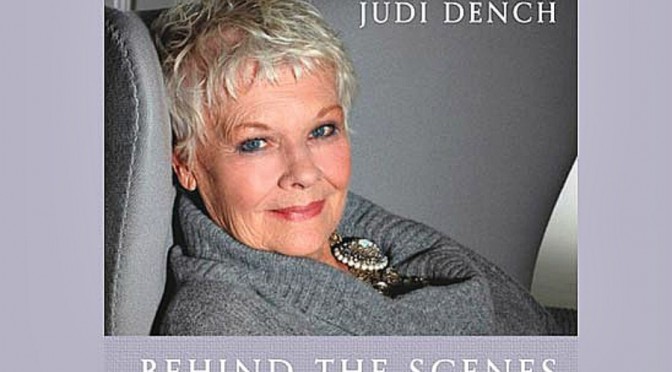 In the preface of her new photo album, BEHIND THE SCENES, Judi Dench ruminates over the past decade, and despite travelling to India twice on the two Marigold shoots, filming in Hollywood for the first time under the direction of Clint Eastwood, meeting an idol, Sophia Loren and joining a ladle of luvvies in the TV series The Cranford Chronicles, she remains displeased that her recurring role of M in the James Bond franchise was terminated in Skyfall.

And we, audience members, readers, fans, have nothing to grumble about with the publication of BEHIND THE SCENES. It’s a gorgeous package of pictures and anecdotes spanning 75 years.

From early childhood photos of her and her family, to pictures taken this year, BEHIND THE SCENES is a 250 page pictorial delight, a visual testament to the vibrant, vital and vivacious thespian who turned 80 on December 9.

Lucky for us, she states that she has no plans to retire. Indeed, she writes that she wants to do something different next, preferably something dangerous. It is fair to say danger seems to have played a prominent part in her career, never having sought safe harbour in the choice of projects, from early stage performances to her latter day screen creations.

Fearless in her choices, and fearless in her fun, too, Dench is a great practical joker, who knows that any play, for stage or screen, has its essence in the word “play”, and that whether comedy or tragedy, it is the playfulness, albeit disciplined, that will out.

The book is worth the price of admission for the photos alone, – a thousand words and all that, but the paragraphs or captions that accompany them are wonderful insights into their context.

Family photos, press and publicity pictures, on set shots, BEHIND THE SCENES is a vivid testimony to an actress who quite rightly is acclaimed and adored, awarded and decorated. The kaleidoscope of pictures is a casting call of super-luminarie luvvies and silver screen stars through six decades, spotlighting a career that has become the Dench –mark for all who would aspire to match her provenience.

The cameras are rolling on the new Bond film and for the first time since 1995, Judi Dench will not be part of the company. Fans of the franchise will feel it.

The good news for fans of the Great Dame is that they can anticipate future performances in a myriad of movies and quality television due to her self-proclaimed unflagging desire to continue to work. This despite her recent diagnosis of macular degeneration and her blossoming companionship with the not so coy toy boy, David Mills. Picture that!

BEHIND THE SCENES by Judi Dench is published, beautifully bound and in full colour, by W & N.