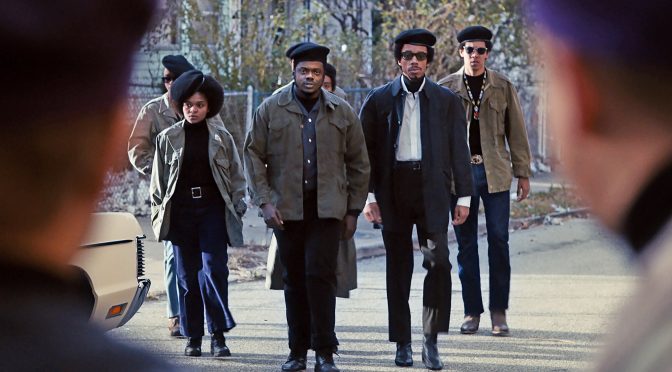 “The only real democracy is socialism. Housing, justice, peace… Life, liberty, happiness… It’s all right there in the Declaration of Independence. But when poor people demand it, it’s a contradiction. It’s not democracy. It’s socialism, dig?”

Can you dig it?

These are the lines attributed to Fred Hampton, chairman of a Black Panther Chapter in Chicago, the Messiah figure in Shaka King’s shockingly thrilling film, JUDAS AND THE BLACK MESSIAH.

Socialism is the S-bomb in devoutly Capitalist America and it caused an explosive reaction in J. Edgar Hoover who established COINTELPRO—a counterintelligence program designed to quash dissenting domestic political voices and organizations through surveillance, infiltration, discrediting campaigns and disruption—turned their sights on the Black community to neutralize the archetype Hoover coined “Black Messiahs.”

He was referring to rising Black and Civil Rights leaders and, in 1967, Hoover opened a file on a Black college student named Fred Hampton, whose community activism had brought him to the attention of the agency.

Under his leadership, The Black Panthers reached out to the Young Lords, a Latino group, and the Young Patriots, a disenfranchised white organisation, to form a rainbow coalition of oppressed brothers and sisters of every colour.

This was a Red Scare that caused a White Fright.

The bureau promptly placed Hampton on its “RabbleRouser” or “Agitator” index, identifying him as a key militant leader who posed a danger to National Security.

Simultaneously, the FBI planted an informant, William O’Neal, into the ranks of the Black Panthers to track Hampton’s messaging and movements from the inside. This infiltration forms the nub of the narrative of JUDAS AND THE BLACK MESSIAH and what a high octane history lesson it is and very timely with the recent groundswell of Black Lives Matter and the insidious persistence of particularly white male supremacism.

Inspired by true events, JUDAS AND THE BLACK MESSIAH is directed by Shaka King, marking his studio feature film directorial debut. The project originated with King and his writing partner, Will Berson, who co-wrote the screenplay, and Kenny Lucas & Keith Lucas, who co-wrote the story with Berson & King. It’s a powerful story, powerfully written, and powerfully produced.

JUDAS AND THE BLACK MESSIAH stars Oscar nominee Daniel Kaluuya as Fred Hampton and LaKeith Stanfield as William O’Neal. Both actors are at the top of their game, giving peerless performances that elevate their characters from bland, stereo typical hero and villain pigeon-holing to textured and layered, flesh and blood people.

Actually, there are terrific performances all round and a mesmeric shooting style plus a fantastic score from Mark Isham and Craig Harris.

JUDAS AND THE BLACK MESSIAH strikes like a spiked Spike Lee joint and demands to be seen.