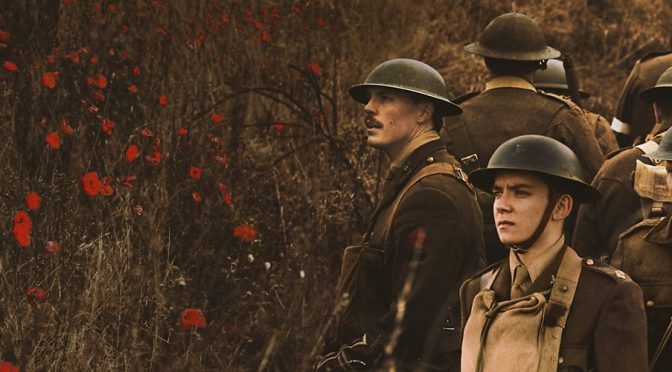 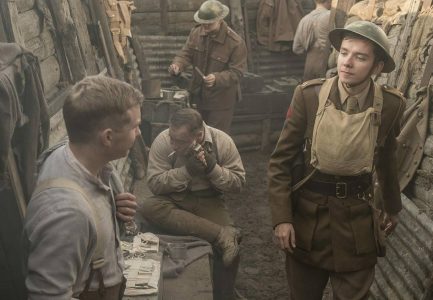 I can think of no better way to commemorate the centennial anniversary of the Armistice than to see director Saul Dibb’s poignant, powerful and perfectly rendered production of JOURNEY’S END.

Set in March, 1918, C-company arrives to take its turn in the front-line trenches in northern France led by the war-weary and whiskey-soaked Captain Stanhope.

A German offensive is imminent, and the officers Osborne, Hibbert, and Trotter, and their cook, Mason, distract themselves in their dugout with talk of food and their past lives.

It’s banter that belies the ticking time bomb just below the surface of their business as usual palaver. With no future to look forward to, food is the only present pleasure, and reminiscence the only real comfort.

A young new officer, Raleigh, has just arrived, fresh out of training and abuzz with the excitement of his first real posting –not least because he is to serve under Stanhope, his former school house monitor and the object of his sister’s affections.

R.C. Sherriff’s play Journey’s End was previously adapted in 1930 – the feature debut of director James Whale, who went on to make the iconic Frankenstein, and featuring an ealy motion picture performance by Larry Ollivier – and remade in Germany the following year as Die Andere Seite (The Other Side).

Apparently, the play was so successful and the James Whale film was so successful, that Sherriff was persuaded to novelise the play, which moved stuff outside the dugout, to go along the trenches and over the top, and with more subtext.

Screenwriter Simon Reade has amalgamated the play and the prose and given the dialogue a slightly saltier taste, something more akin to what men say under extreme pressure.

Heading up a terrific cast of British talent – Paul Bettany Toby Jones, Stephen Graham, Tom Sturridge and Asa Butterfield – is Sam Claflin as the officer in charge of C-Company, Captain Stanhope. Admired by his fellow officers and men alike, Stanhope is, nonetheless, a shell of the man who joined up three years before.

Claflin finds the right level to portray a functioning alcoholic, the weight of responsibility to his men and to obedience to superior command that seems out of touch with reality a shocking thing to bear.

Paul Bettany plays Osborne, who is Stanhope’s closest friend and confidant. Old school, indeed a teacher in civilian life, he is affectionately known as Uncle to the boys in his charge. A beautifully rendered performance.

Asa Butterfield plays Raleigh who provides our eyes and ears in this claustrophobic, death and dread-drenched world, for he arrives fresh out of training, assigned to C-Company because he has pulled strings to be with his sister’s affianced.

A shell shocking story of mortar martyrdom and the stench of trench treachery, JOURNEY’S END is much more like The Hurt Locker than a traditional blockbuster war movie, a narrative about the authentic experience of war not the glorification of it.