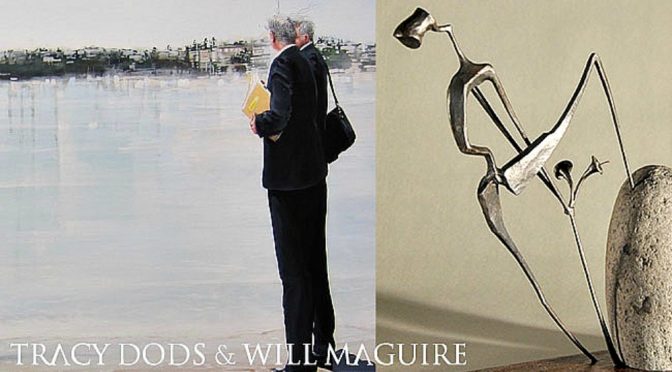 As part of Art Month there is a wonderful exhibition currently showing at Traffic Jam Galleries , by Tracy Dods and Will Maguire, under the umbrella title JOURNEY OF EXPECTATIONS.

With its recurring motifs of businessmen walking into, or being consumed by the sea – Tracy Dod’s idiosyncratic work is bleak yet striking.

Most of her works have ominous clouds or at least a hint of stormy weather in the background.

Tracy lives in the Blue Mountains, New South Wales and spends much of her time in Sydney, observing the people she paints in areas/zones of urban activity such as Martin Place.

Merger, featuring two older businessmen on the edge of water, is not just about a business merger but is also slightly surrealistic – note how the hair of the pair is blown and merged together.

Mare Ditat (The Sea Restores) features a hunched, anxious businessman , holding his jacket, perhaps returning to the waiting viewer – cleansed of his sins of corruption?!

Momentary Equilibrium is rather surrealistic too in the depiction of the tumbling windblown, twig like hair.

In White Paper, the reflections and flying hair are marvellously depicted.

In Beachwalk you can feel the different textures shown ranging from sand to grass and sea. In this painting, the figures are rather insignificant, it is nature that is important.

Decamp features a floating, bewigged barrister prominent in the composition but you can’t really see his feet and legs. Is he just a dream?!

In Plausible Deniability, a solitary figure stands at the edge of a huge surf, pondering , the city behind him.

In Legum Servi Sumus ut Liberi Esse Possimus (a quote from Cicero ‘We are slaves of the low so we may be free’) the robed and wigged barrister with his back turned to us is almost flying into the sea.

Will Maguire is one of the very few ‘contemporary ‘ blacksmiths in Australia and resides in the Hunter Valley. He forges and works with hot steel manipulating it in an attempt to create beautiful new and genuine forms.

Striking contemporary design is combined with traditional skills, keeping the integrity of the craft intact. Using tongs, hammers and old erratic machinery the iron he uses is given depth, texture and feeling and is sometimes combined with other materials like rocks.

The figures are almost always thin and elongated yet extremely vibrant and dynamic with an indelible singing ‘line’.

In Busy Gardener, one can feel the effort of the figure pulling up the plants.

Young Poser is a portrait of a decadent aesthete but there are contrasts – note the slinky curve of the body yet the strong, angular arms.

There are several figures based on older people. In Old Man, Aged Care features praying-mantis like sticks, and the Fighting Alzheimer portraying a figure with a clenched fist, raised hand and flailing walking stick.

The figures in Victory Dancers are tall and thin yet simultaneously gnarled and gnome-like. In both this work and Fighting Alzheimer are we supposed to pick up on references to First Peoples?!

Sugar and Salt is full of movement, depicting an elongated, angular figure hard at work at the gym.

This was a fascinating, thought provoking exhibition. JOURNEY OF EXPECTATIONS is on display at Traffic Jam Galleries until March 23.

One thought on “JOURNEY OF EXPECTATIONS : TRACY DODS AND WILL MAGUIRE @ TRAFFIC JAM GALLERIES”