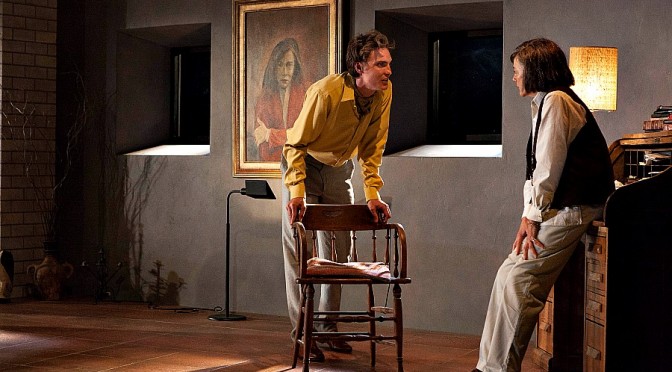 I have just come home from seeing Switzerland. Joanne Murray Smith’s play is is as exotic, breath-taking and at times frosty as the great European  tourist destination.

This latest work is a bold, inspired flight of the imagination. A  great fan of American mystery writer Patricia Highsmith’s work, Murray-Smith has written a play in  her style and included her as the central character.

A masterful choice, as Highsmith makes for a great dramatic character. She was a very cantankerous, eccentric even bizarre woman who you can’t help but be drawn to.

The play takes place in  Highsmith’s opulent llving room featuring her very prized writing desk and  her equally, rather scarily, prized collection of guns and swords on the mantelpieces.

The action begins with the cranky elderly and ill writer (she has recently been diagnosed with terminal cancer) rather reluctantly receiving a new house guest. It is a young man, Edward, from her publishing house.

Highsmith has scant time and regard for him  and tries to make his visit brief. Edward won’t be brushed aside, however. He has come on important business, pushing his Company’s agenda. The Company want, even demand, that Highsmith write another Ripley novel. If she will, he has a contract all ready to sign.

No matter how clever a play is, it definitely helps when you have as good  a production as Sarah Goodes’ is to present it to the public for the first time.

Everything about this production zings. The creative team of set designer Michael Scott-Mitchell, lighting designer Nick Schlieper and composer Steve Francis evocatively create the world of the play.

Sarah Peirse and Eamon Farren give exquisite performances. Peirse becomes Highsmith in one of the outstanding performances of the year. Eamon Farren matches Peirse with his character proves equally robust.

One suspects that this production will sell out fast. Best get in quick.