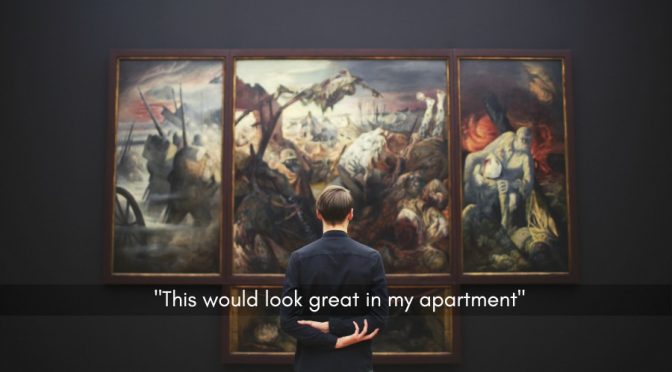 Jetpack Theatre’s ART HEIST is inspired storytelling. Yet there is no story and no telling. You and your companions are the story, the triumph, the saga! Whatever exposition you choose to tell. The 3 performers are just there, part of the tale as you write the script. And these are very nuanced actors with improvisation instincts that must be tested over their 3 shows a night. Great scene partners too because this is bespoke, immersive theatre of the highest calibre.

But, not quite knowing what I was getting into I gathered an odd assortment of four players. We were young (our Yr 11 Workplacement student, Lauren) and old (that would be me). A married couple (Bec and Ben) who know each other well, naturally. I don’t know Ben well except for a dance with him at the wedding and Lauren didn’t know anyone except me. We were a logical yet creative collective. An artist, a banker, a technician and an actor.

Not naming any names but several friends (Patrice and George) were adamant that their claustrophobia and fear of small spaces prohibited them from coming with me. It’s nothing like that. You are in a large space, torches available with the glow of laser grids and security cameras for comfort.

But yes it is a puzzle.

After finding ourselves in a darkened Art Gallery after hours and tasked with the Robin Hood theft of a valuable painting so as to return it to its rightful owner we planned and gathered implements, clues and courage.

Lauren, you seemed really nervous about sneaking past the guards for a while, was that right or were you just biding your time?

I was definitely nervous at the beginning of the art heist and quite afraid to make any movements at all. As time went on though, I reviewed over the hints given to us and could check if we missed anything for the heist. So yeah, I was originally nervous but as time went on it changed into biding my time as I awaited for other tasks I could assist with and could understand the exact movements of the guards.

Yeah, I was more worried about crawling under a table to be out of view of that guard who kept circling with the torch. Having grey hair and wearing white was really useful for hiding upright … just a hint to our readers. Have you got any advice for audiences?

My advice for audiences would be to go into the experience with an open mind and inspect everything you can and look for things that might not be obvious to the eye. When you are planning the heist make sure you have all the things you need because you do not want to be backtracking, as it will waste the limited time you have.

I would have to say I’m a bit sore and I can’t tell if I overreached in my attempts to be invisible or whether it was all the laughing the 4 of us were doing on the sidewalk after the show. I’m pretty proud of the fact that we did manage to steal the painting even if you and Bec had to manhandle it out while I used my wiles on the guards … heaven only knows what Ben was doing at that time. What was it like communicating in a whisper with someone you have never met before to do such a complicated physical task?

Communicating with someone I had never met before might seem very hard to do, but I found it quite easy as the intensity of the task outweighed the idea of the awkwardness of talking to someone you don’t know. I had to look at Bec’s actions and react in an impulsive manner to ensure we could complete the task. A lot of communication was done non-verbally and you really had to concentrate but react quickly at the same time.

Quick reactions are definitely a must and I loved how each of the four of us brought a different skill, viewpoint, way of seeing and so contributed a different piece to the solution. That thing you spotted to get us into the other thing, so we could get the hidden things we needed to … you know … that was brilliant and saved us heaps of time. Did you love the detail that the production had?

The planning of the production was done in such a brilliant manner. The way everything is placed makes you think whether or not you need it for the heist and the attention to detail is really vital in completing the task. It was really helpful how each of us thought differently in the situation as it contributed to the parts leading up to the final task. Overall, the production’s precise planning was really well thought out and I really enjoyed it.

Yep, me too. Seemed like everything might have had a purpose … Bec kept grabbing stuff just in case. It was so well conceived, that anything could have been part of the whole. Jetpack Theatre just has a way of seeing the world that I adore. You said it’s type of theatre experience you would recommend to people your age, what is it that your generation would take away from experiencing a performance like this?

I think my generation would take away this new innovative idea of theatre performance that isn’t as well known and communicate with more and more people about experiencing the performance as well. Although there are escape rooms that are popular to my generation, this immersive theatre company shines above them, as it couldn’t be more realistic with the actors contributing to the decision-making and intensity of the heist.

We seem to agree on everything. Part of having to work as team under pressure, I suppose. ART HEIST is make-as-you-go art for any age of audience I think. And you are right about it not really being comparable with the escape room craze. That’s great fun but not interactive in the way that Theatres’ immediacy makes the brain come alive. At the risk of oversharing, I learned a lot about myself tonight … I’m still laughing at my Disney hippopotamus pirouettes away from the guards’ torches. What was your highlight?

My highlight was definitely being caught red handed whilst attempting to steal the painting. I had to react quickly and I remember saying I was fixing the hole in the wall even though there was no hole to begin with. But then again, the whole heist was a highlight as it was an enjoyable experience that had you on your toes the whole time and tested your attention to detail as well as your quick decision making as there was a time limit.

Great fun all round and recommended across the board. My thanks to my fellow gamer theatre-makers and kudos to Jetpack for the most fun I have ever had in an art gallery.

This review was written in collaboration with Workplacement student Lauren Carter.