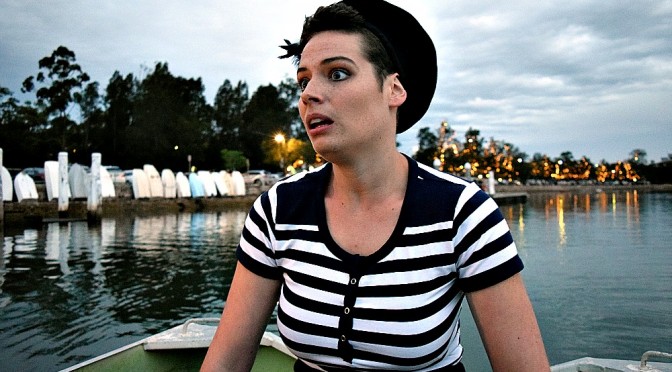 If you do it properly, life is one big adventure. Or, I suppose, technically, a series of adventures. Like being rowed around Iron Cove with the sunset behind you… and with a bewildered owl in front of you. Jetpack Theatre Collective is an inspired and inspiring group of artists setting out to have some interesting adventure and PEA GREEN BOAT- producer Kenny Murphy, director- Jim Fishwick, cast- Hannah Cox and Alexander Richmond– is their latest foray into immersive, boutique performance. It is nonsense. Pure, breathtaking, exciting nonsense.

THE OWL AND THE PUSSYCAT was written nearly 150 years ago by painter, illustrator and limerick writer Edward Lear and was included in his collection Nonsense Songs (1870). It has been popular with children ever since. An owl and a pussycat set to sea in a beautiful pea green boat and their love develops on the year long journey until they are married by a turkey in the land where the Bong Trees grow. (Not that kind of bong!)

PEA GREEN BOAT is Stewart Lee’s adaptation of this poem and features a dark, savaged, delusional exploration into the mind of the owl through its diary. “The Owl’s diary. Day forty-seven. The Cat has eaten all the honey. Surely we will die here.”

Who is Stewart Lee? This is the question on a page of his official site where he foregrounds what reviewers and the public think of him. From the vicious to the dismissive. It turns out that he is a British comedian. In 2012 he was written up as the 9th most influential person in comedy. Ahead of Miranda Hart no less.

Lee has taken the classic poem and used the absurdity at its heart to explore a world where basic needs like hunger and love can twist and warp. Eye to eye with the owl, the silliness of its unknowingness gives way to the unsettling notion that the bird may be deranged. And when the turkey confirms our fear for the creature, we learn the truth of the horror. There are a plethora of other animals mentioned, in a nod to the animal inclusions of the original book, as being trapped on their own small boats with their own problems. The elephant and the mouse, the spider and the fly are really not going to end well either.

I believe that Lee has kindly waived his professional rights for this production and since the Company only has three  patrons for each outing, that’s a good thing. Why only three? Because between the owl and the oarsman, only three other people fit in the pea green dinghy.

I really don’t want to say much more about that as the performance is crafted with care and detail to be elusively bespoke. I would mention that there is some clambering and light wading involved and I would also encourage you to use the ‘rich people’ option when you buy a ticket… give a little bit more to support this terrific company.

Hannah Cox’s wide eyed owl is odd and quite funny when we first meet it. But as the trip continues Cox imbues the character with the awkwardness and misbelief that atmospherically develops the mystery of what is actually going on. She has excellent control vocally and physically and an inclusive and compelling presence. The atmosphere is also developed by the almost invisible rower who occasionally quotes the original poem. And by the softly spoken down-south Baptist-style turkey who is obviously suffering PTSD from the events he describes.

The conception is marvellous and the execution equally thrilling. The one sadness I have about the adventure is that there was no moon. I would have enjoyed a dance with the turkey by the light of the moon…

PEA GREEN BOAT continues until 25 November (excluding Mondays) at 7pm, 8pm, 9pm. Capacity of 3 audience members per session. The exact meeting point and other important details are emailed to you after your tickets are purchased, but there is a short walk from Bus and Light Rail stops in the Inner West. Parking is available.