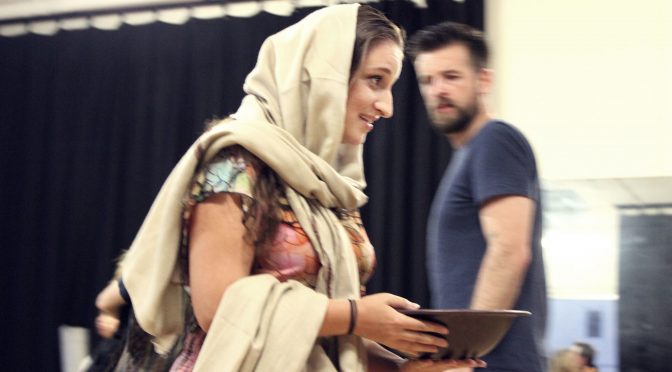 In a rare treat for our readers, Sydney Arts Guide was invited into the rehearsal room for the first full run-through of JESUS CHRIST SUPERSTAR, produced by Packemin and directed by Neil Gooding.  Escorted by the disarmingly chatty and vibrant Brittanie Shipway, who plays Mary Magdalene, assisted by the completely charming Toby Francis, taking on the role of Judas, I had a production desk seat for a thrilling evening of unburnished performance excellence from the full cast of nearly 70.

Flouro lights above, only a piano, bass and drums, no mics, a no-set flat floor and a Green Room in the carpark, not to mention a Quidditch T Shirt in the crowd, the noise and pre-rehearsal hubbub hit a peak with a whole cast warm up to Calvin Harris’ ‘We’ll Be Coming Back’.  Then that mysterious thing happened with one bar … just one bar … of an electric guitar wail as an ensemble of superior focus transmogrified the place and time.

Packemin’s website says this a new production so I had asked Brittanie what made it new.  “I guess it merges traditional storytelling with a new twist on it.  What Neil is really looking for is that human connection rather than just regurgitating either the Bible or Andrew Lloyd Webber and Tim Rice’s musical.  Instead, making sure Toby and Joe (Joe Kalou as Jesus) and myself all find relationships with each other.”

When the rehearsal begins, it’s evident that Gooding has finely calibrated those relationships and not just among the principal characters.  Initially, Kalou has the quiet interiority one expects of Jesus but as he sits to teach, his demeanour opens out into a charismatic smile and the small stories on the faces of his students is adoration writ large.  Gooding also has a quiet way about his direction as he ignores the between scenes discussion and practising around him to speak gently to a small group of his cast focussing in on how he needs them to physicalize a tiny emotion in the next scene. 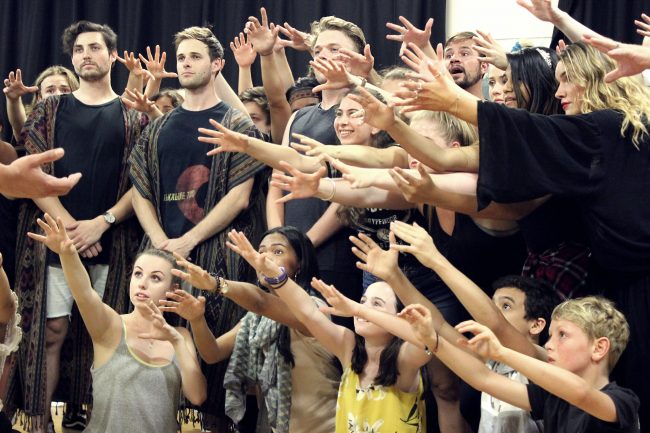 In Gooding’s hands this appears to be a very emotive production, quite chilling in places despite the heat generated by the energetic dancers.  There’s the pulsing rock score and some thunderingly precise choreography from Cameron Mitchell, but the moments that prick behind the eyes are still there. The show stopper solo is ‘I Don’t Know How to Love Him’ and it is so well known that I had to inquire how Brittanie saw Mary’s feelings at that moment.

Gooding and she have an understanding that Mary already knows she loves him. “What she is struggling with is everybody seeing him as a Messiah and how are you supposed to love the Son Of God? As opposed to ‘he’s just a man, I’m just a woman’ and we have this relationship … and we work!  So she has to see his humanity but she still struggles with how am I meant to love this superstar, this rock star.  She just has to see him as he is.”

It’s a pretty stunning three minutes, that song.  Genuine rapt attention from every performer, techie or reviewer around the room and a huge burst of spontaneous applause.  There’s a discreetly modern sensibility there, a wryness and half-smile of disbelief and a physical drawing to and pull away that combines with a peerless soprano to bring Mary’s struggle home to anyone watching. 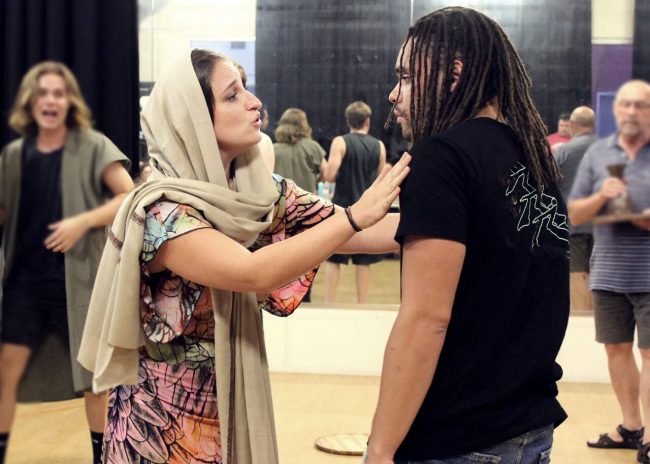 Brittanie also speaks passionately about the history of the piece. “Neil is very good at going back and researching, so we are approaching it from the historical opinion of Mary Magdalene was never a prostitute. She was the daughter of Lazarus, who was risen from the dead, so she … was quite wealthy and the apostles described her that way.  She is only mentioned as a prostitute once and I think that might have been about her father being a tradie.”

I asked about research and the answer is reading, lots of reading “especially the Book of Magdalene which was found in the Dead Sea Scrolls. Even the images of Mary Magdalene, the difference between the Renaissance or Romantic Period paintings or artwork compared to modern depictions and depictions from Middle Eastern cultures.  Images are really important. Helps you find the character.”  Get actors talking about their process and the conversation hits deep-well depth pretty quickly and Brittanie is engaging and thoughtful about her creation of the role.

In practice, though, what I thoroughly enjoyed in Brittanie’s rehearsal performance was the strength of Mary’s protectiveness, the woman as peace maker.  Though dwarfed by them, Mary is happy to serve the disciples with wine and food, yet she has no qualms when she lays her hands on Judas’ chest to separate him and his forceful expressions of concern from Jesus.  She and Toby are great friends obviously, except for the fact that he opportunistically beat her gaming score while she was distracted talking with me.   As she pelted off to right the wrong, Toby and I got chatting about how much fun the show has been to work on, you can feel it in the laughter echoing into the carpark as Toby warmly praises his fellow artists. 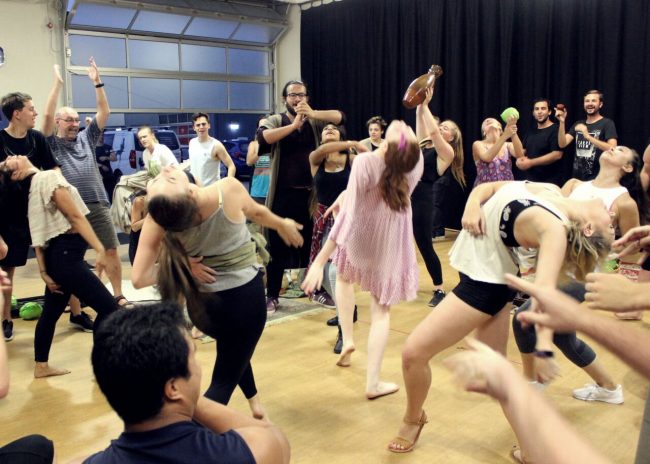 When I get to see the other characters and the ensemble in action there is commitment all over. The dancing is needle sharp and Gooding and Mitchell give the viewer many chances to admire the artistry of their shapings and freezes.  Treelike hands dynamically twitching above heads or the breathless stillness behind the blame, I am so looking forward to seeing their meticulous crafting on the big stage.

Another person who could speak for hours about what his character was and is, Toby, even in that crowded rehearsal room, brings a watcher to the stage. Physically tall, Gooding has Toby’s Judas apart and able to see events over the heads of the masses but his betrayal will twist him low.  Apart from the voice which is all one hopes for, Toby gives his creation a despair and conflict that are terribly human.

This is, after all, a show which is nearly 50 years old so it has to have more than just a tingling of reminiscence of teenage years.  As someone who listened to the album obsessively until moving on to the hippies-on-the-bus film before putting it out of my mind for half a century, I was expecting to wallow in nostalgia. 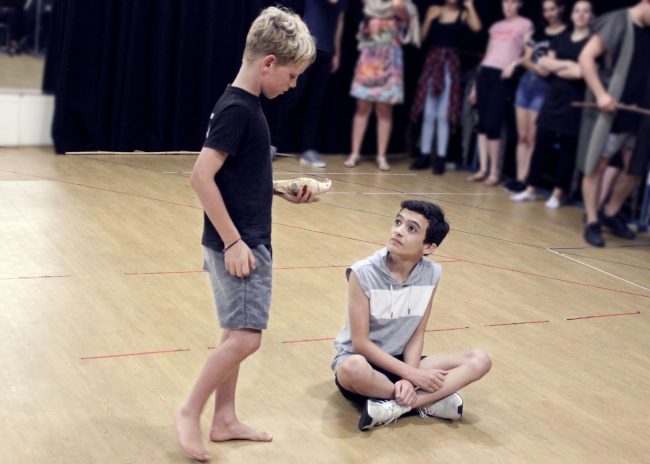 And, perhaps, the inner adolescent is sated but this JESUS CHRIST SUPERSTAR is a production which balances the thump of the driving music with an intelligent consideration of how the personalities involved affect the story we all know.  Having had a small insight into the tech and design, I can’t wait to see the lighting, staging and costuming when the show opens at Riverside Theatres, February 8. 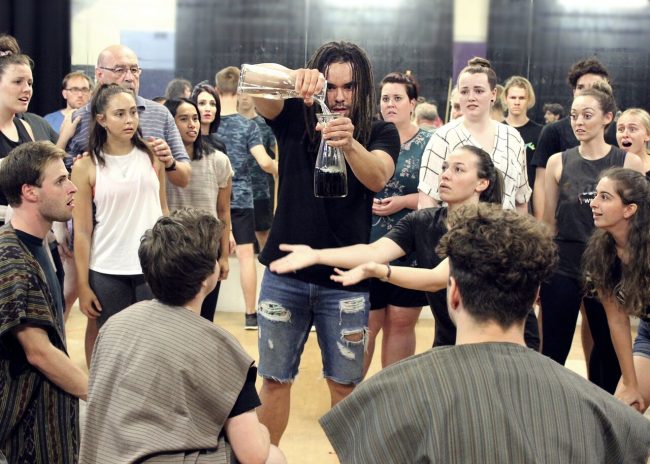