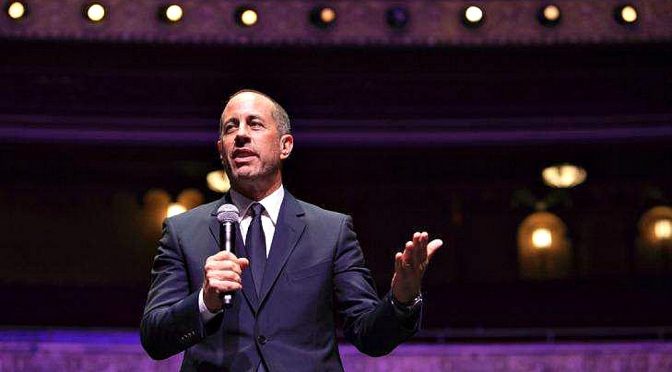 “You made an effort to come, to worry where you will meet, who has tickets, to get here on time then get out of here on time!”

These were the first lines of Jerry Seinfeld’s opening monologue to a sold out crowd on his second show on Monday night.

The audience, a diverse lot from middle aged to teens that weren’t even born during the run of the show roared with laughter. It was classic Seinfeld humour and he’s being doing it that way for the past 40 years.

Jerry’s career as a stand-up comedian began in the late 1970s in the New York comedy club scene. Not long that after he became a favourite on the late-night talk show circuit where his witty and sharp observations about day-to-day life from the quirkiness of weather reporters to phone answering machines became his trademark.

Then from 1989 to 1998 he co-starred, produced and created what TV Guide Magazine named the Greatest TV Show of All Time: a show about well; nothing. After a slow start and at one point an uncertain future, Seinfeld the sitcom became a cultural phenomenon.

Phrases like “Master of Your Domain”, “Yada, Yada, Yada”, “Festivus” and “Not that there’s anything wrong with that” entered the vernacular. It made the cereal loving, blue jeans and white runners Jerry a household name and he remains the highest paid comedian in the world. 180 episodes chronicled the misadventures of Jerry and fellow New York friends.

A testament to the show’s enduring effect on pop culture was felt in Australia when a major business was charged with fraud when found to have taken the name the Penske File from an episode. (It is also the name of a George Costanza themed bar in Brunswick).

Interestingly during the week Seinfeld was photographed visiting a graffiti artwork wall in Fitzroy depicting him famously rejecting a hug from singer Kesha at a recent red carpet event.

It has been nearly two decades since he last toured Australia. There was not an empty seat left in the 11,000 seat capacity Hisense Arena in Melbourne. Tickets sold out in minutes and extra shows had to be added in each major city. Being too young to see his last show and now trying to make my own career in comedy there was no way I was going to miss out this time, bracing the cold, wet and windy night to attend the second of his three shows in Melbourne.

Comic Mario Joyner was the curtain raiser event. Classic Frank Sinatra records were played on the speakers prior to the show and it struck me how Seinfeld is indeed the Sinatra of comedy. Jerry looked more like a smooth lounge singer as he strode out on stage dressed immaculately in a dark suit and tie.

Ninety minutes of pure, rapid, polished jokes ensued without breaking or waiting for a response, leaving the audiences in stitches. No one does observations better than Seinfeld.

He has  honed his craft to perfection. From the uselessness of energy drinks to the questionable battery life of mobile phones, then turning to observations on his family and  the dichotomy of age and life, Seinfeld is more than a comedian, he is a philosopher. There was plenty of approval from the audience whenever his observations turned to comments about our homeland.

Jerry Seinfeld doesn’t swear or need props. All he need is just a stage and and he is the consummate performer and comedian.

Jerry Seinfeld is performing tonight at the ICC Sydney Theatre.