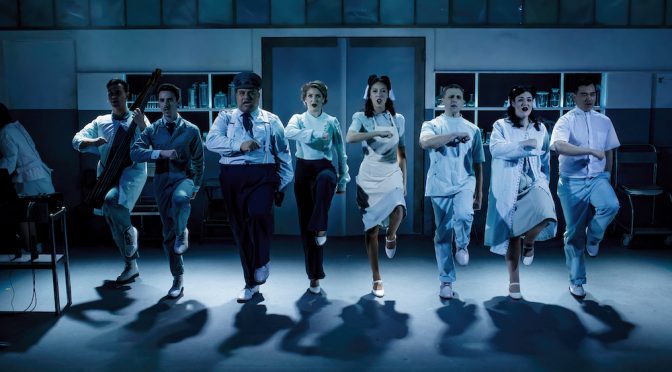 There isn’t much joy to be found in being a conflicted person. One is in a constant struggle. Dr Henry Jekyll finds himself in a torturous struggle between the good and evil forces within him, and it is a struggle which ends in tragedy.

The Hayes Theatre is presenting a revival of the musical JEKYLL AND HYDE THE MUSICAL, an American musical which was first performed in 1990. The musical is loosely based on the 1886 novella The Strange Case Of Dr Jekyll and Mr Hyde by Robert Louis Stevenson. The story was conceived for the stage by Frank Wildhorn and Steve Cuden. It features music by Frank Wildhorn with  book and lyrics by Leslie Brocusse. The play had its Broadway debut in 1997.

The performances were of a high quality. Brendan Maclean played the titular role of Jekyll/ Hyde. Maclean gave a commanding performance, showcasing a strong voice, and convincingly switching between the urbane Dr Jekyll and the increasingly monstrous Hyde. He gave a haunting rendition of the song ‘This Is The Moment’, the moment when Dr Jekyll takes his injection which he hopes will start  the process of eradicating evil, only to find that he creates the evil Edward Hyde.

Georgina Hopson gave a moving performance as Dr Jekyll’s ill fated fiancee, Emma. Emma stays loyal to Dr Jekyll till the very end. There was a special poignancy in the duet that Hopson sings with Maclean,’Take Me As I Am’.

Maori transgender performer Brady Peeti gave an outstanding performance as Dr Jekyll’s other love interest, Lucy Harris. Hers was an  evocative performance and rendition of songs such as ‘Sympathy, Tenderness’ and ‘A New Life’ were touching. Brady reminded me a little of the American transgender singer Anohni. There was one, however, off-putting scene where Peeti was in the middle of performing a song and a musician approached her, which the musicians did at times during the play, and she told her to fuck off. I’m not sure what that was about.

Madeleine Jones  gave a good performance as Dr Jekyll’s lawyer and loyal friend, John Utterson. Her duet with Maclean on ‘Pursue The Truth’, with Jones’ character being the only one who was supportive of Dr Jekyll’s experiments, was well performed.

This was an engaging show. It was very sad and dissonant. This adaptation and updating of Stevenson’s dark novella shows that it still has plenty of charge.

JEKYLL AND HYDE THE MUSICAL is playing the Hayes Theatre, 19 Greenknowe Avenue Potts Point. Performances are Mondays at 6.30pm, Tuesdays to Saturdays at 7.30pm and Thursdays at 1pm and Saturdays at 2pm.