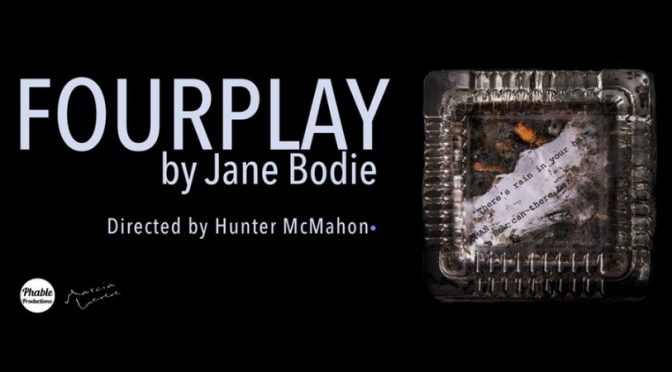 There are some very interesting notes in the Bodie’s script about which characters will engage with whom. About focus and perspective and eye contact and choices about naturalism in production with scope for non-naturalistic interpretations. This production chose a naturalistic physical setting with the theatre in an usual configuration. Sofa and tables on the floor as well as using the small stage, with the use of practical lamps and an overhead bulb to indicate place. It must have cost them a lot of seats but served the production well.

The production flows well ,despite an irritating 25 minute late opening, and Director Hunter McMahon has the luxury of being able to stand or sit his cast for longer than usual periods of time. The intimate nature of the staging gives an audience a strong sense of peering in on their lives.

Unfortunately, sometimes the cast, particularly Natasha, are too conversational and in a space where there are loud ambient noises in the room and thump, thump from the DJ outside, they are almost impossible to hear.

Maria Lemm helms the production as Alice and is strong vocally and her interactions with Jack, which the playwright suggests are to be played naturalistically, have warmth. Towards the end of the play there are three descriptions of Alice by three different people including herself and Lemm’s performance does bring elements of all three into her character choices.

The non-naturalistic, little contact style for Alice and Tom interactions works against Jack Berry’s Tom. We are seeing their relationship at the end but it’s very difficult to see why they are still together or what might have been before. It’s hard to care but when the audience becomes aware that Natasha is not on the same page as him, empathy does surface for his struggle to be an honest man.

Evan Piefke as Jack is obviously a crowd favourite as the audience find his impassive and monotone delivery funny. The text has quite a few funny moments actually and they are neatly woven into the situations and the characters rather than being overtly comic.

There was a lot of support in the room on closing night and a look at their social media indicates that these artists have a strong following which is, of course, vital to survival.

Phable Productions/ Marcia Lemm’s production of FOURPLAY  has completed it season but I will be interested to see where their next production pops up. I am always hoping for new venues to be discovered in support of nascent companies with drive and a willingness to put on their own work.