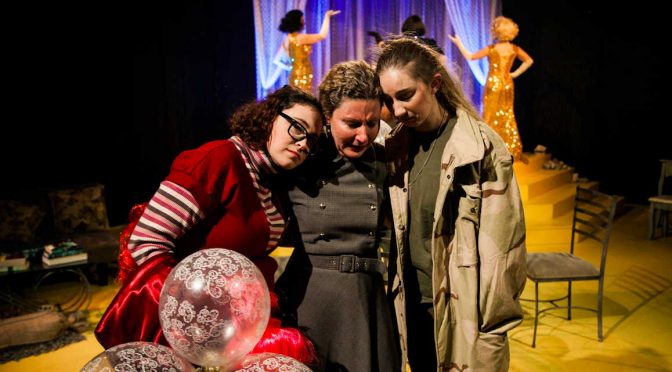 The unravelling of inter-generational female relationships are brilliantly explored. The right to die movement, friendly fire, women in the military on the front line in Iraq, hiding sexual assault on military women.

This play presents the best possible arguments against military women serving in all combat roles.

Tasha O’Brien is especially believable as Billie, plays her part with great sensitivity, taking us deep into her life of ugliness rage regret and loss, building our empathy for her plight both in Iraq and at home.

Nyssa Hamilton as Maxine, is a natural talent delivering a high energy performance bursting with fresh vitality and has a high-pitched squeaky voice and manner that easily ingratiates herself with the audience.

Director Julie Baz has a gift for realism and has visualised an almost perfect mise-en-scène for each scene of this play, where the combination of choosing the perfect cast for each role, and every element of the set design and costumes and music soundtrack, have joined together to create a unique theatrical experience.

We journey back to the war in Iraq to discover Billie’s secrets. Lorelei Lee and Dorothy Shaw singing and dancing their way into Maxine’s life and providing her with important life lessons.

Running time – 135 minutes including one interval.