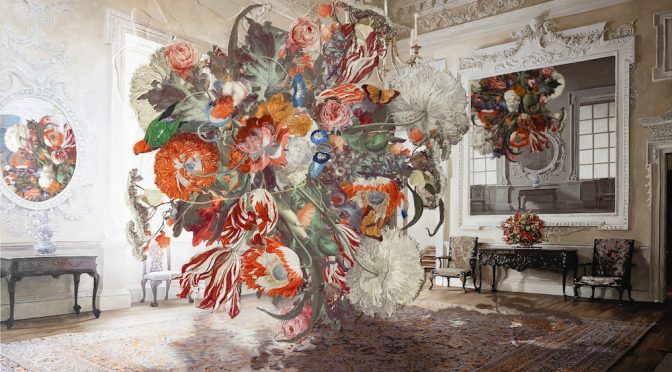 With his exhibition of works, Luscus, mixed media artist James Mc Grath intends to challenge the viewer’s innately isolated lens. He has other stated aims as well referencing the current demise of our natural world, climate change denial and a reconciliation of western artists and their portrayal of the Australian landscape. To pack all of this in a homogenous exhibition is quite a challenge. What we are presented with at the Olsen Gallery are groupings of works – mixed media and film with a tenuous bond to each other – that of referencing carefully curated periods in art history.

What do they all have in common – even in a limited sense? The Baroque period’s preoccupation with classical subject matter, its floral still life, the drama of its landscapes. However subtle or obvious Mc Grath, takes an element from art history and tweaks it before quoting it.

In the first series of oils on canvas with acrylic gel overlays each image seems to portray a marble statue from the Classical Period – or severe style- of Greek sculpture. This period is recognisable for its idealised human figures with severe or expressionless faces in white marble. It is the attitude of the figure that conveys their story – their faces are masklike. These statues have come down to us imperfect – a missing hand, foot, nose – something. They are iconic of their period and here Mc Grath has taken them and overlaid a rose coloured gel with an ocular hole pierced through. You can be forgiven for thinking that he is relating them to the art world and referencing them in the same way Warhol referenced pop culture with Marilyn Monroe.

Got it? Maybe not. The name of the exhibition is Luscus, so beware of declaring yourself too soon. If the statues are somewhat familiar their facial expressions may force you to think again. Look closer. Think back to those Renaissance masters and their subject matters…will you recognise a figure or two lifted from a famous canvas or wood panel and re-rendered in black and white to be perceived as Ancient Greek statues? These quirky pictures and their abstruse references would surely have amused Dali.

In Luscus and Luscus II we are presented with what appears at a distance to be blown up silvertone photographs of dense eucalypt forests completed with that pierced acrylic gel overlay. However something isn’t quite right – and it’s not the rendering. It’s the subject matter. The trunks of the trees are centred too symmetrically in the frame, and the branches of the trees have been staged carefully to circulate the eyes around the image. Can it really be a photograph? Up close, you see Mc Grath’s technical mastery of a photo-real painting style with the added treat of painterly texture.

Again, what you first see is not the only way of seeing.

As an extension of these two paintings, and referencing the first seven works depicting “classical statues” are the five minute video Luscus, and the Luscus Diptych, an oil on canvas mounted onto board. These related works were physically distanced in the Gallery which is unfortunate as although the exhibition space is not huge, the two works enjoy a symbiosis that adds to their reception. In both we see the depiction of Aphrodite as a statue in an Australian flora environment. She is ‘photographed’ and overlaid on a photo-real canvas in the painting. On video she is in a nebulous space admiring the circulating banksia as she is being admired through the curated vision of a moving, colour-changing pierced gel which in turn is watched on a screen. The video has a flirtation between western art represented by Aphrodite and Australian flora that isn’t achieved by the canvas alone.

The ten minute video, Ocular Fleur, is similarly distanced from its painted counterpart, Cloud Flora with Bird. These impressive interiors including Cloud Flora and Stairs, have more success in appealing to a historical art aesthetic than making a strong statement about climate denial. They are a treat to look at.

Natura Venor I, II and III could be part of a separate exhibition by Mc Grath. The subject matter lends from the Baroque, from Rubens and Dutch still life, but they play more with expectations than a way of seeing the world. Natura Venor I, II and III are a series of oils on canvas that have a big issue to deal with – what we have done to the environment. They take on Rubens style in their subject matter, their drama, their colour and their execution. In Natura Venor III, the brushstrokes run quickly over the canvas -with the motion of the hunt, the falling of the arrangement of flowers and even the structure of tree. Standing in front of them I couldn’t help but wish they were bigger – there is such scope to be overwhelmed by them.

Instead of hunting a boar, Mc Grath has the collared dogs – humankind’s best friend and accomplice- besetting flowers from a bouquet desired for its role in adorning a home that have been made famous by Dutch still life painters. The dogs are ravaging that part of nature that is useful to humankind.

The works exhibited in Luscus are beautiful and quirky and can be a little disturbing when considering the snarling dogs, or mind bending when considering his references but his stated messages aren’t always clear. Overall Mc Grath’s work is engaging and impressive.

Luscus is showing at Olsen Gallery, 63 Jersey Rd, Woollahra, until May 29.