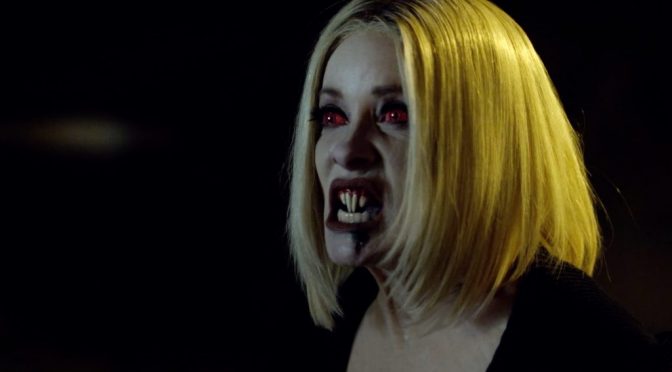 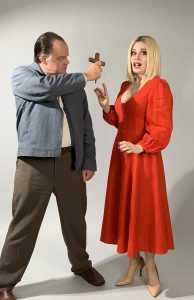 Set in the town of Kinski, (the first of a slew of sly sallies in the genre referential vein), JAKOB’S WIFE begins with an opening shot of a rat in the foreground of a church.

Barbara Crampton, scream queen par excellence, plays the titular character, Anne Fetter. She’s in her late 50s and feels like her life and marriage have been shrinking over the past thirty years. She meets up with an old flame in a deserted spot but cannot go through with her adultery.

Her virtuousness does not save her from being bitten by a vampire at her rendezvous however, and her blood lust starts to accelerate with her libido.

Fellow genre legend, Larry Fessenden plays Jakob, the clergy man who finds new found spice in his spouse. Hot under the dog collar he goes to extreme measures to satisfy his wife’s hunger.

JAKOB’S WIFE is written by Mark Steensland, Kathy Charles and the film’s director, Travis Stevens, and some of the jokes seem like writer’s room scattergun. But there are some genuinely funny, dark and macabre moments.

The baleful effects of a stagnant marriage are stirringly stirred up in this amusing and sporadically insightful film, with its tongue in its cheek as it goes for the jugular.

The film will stream exclusively on Shudder in the US, Australia and New Zealand from Thursday 19 August.