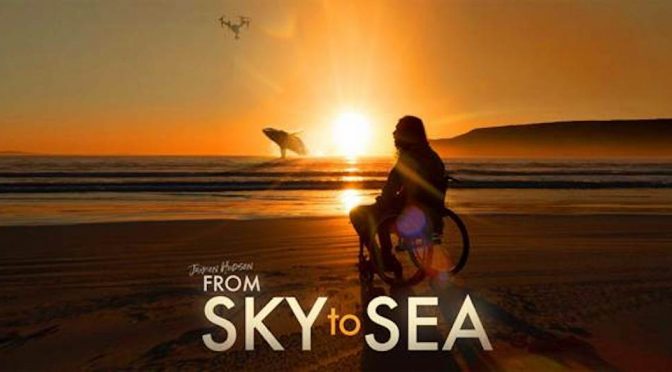 It’s hard to regain one’s voice after shocking adversity. William Shakespeare, of-course, well he had a saying for everything, had a phrase for it, “the slings and arrows of outrageous fortune”.

One only has to look at our Australian Of The Year Grace Tame. She suffered terrible abuse as a child at the hands of a schoolteacher. With the abuse, her voice was silenced.

On a torturous journey Grace found her voice again. To the point where, together with her colleague Nina Fennell, she started the ‘Let Her Speak’ campaign, resulting in survivors being able to find their voice, and tell their story, after their court case had been finalised.

At the tender age of seventeen Western Australian Jaimen Hudson had a devastating motorbike accident which left him a quadriplegic. A catastrophe for a very vital, sporty, intelligent young man. The voice he had spent his tender years developing, and the dreams he had been garnering, were in pieces, shattered.

FROM SKY TO SEA charts Jaimen’s journey from the time of the fateful accident. It shows him pushing himself to find a new voice. to lead an authentic life where he could continue to express himself and make contributions to his world.

Jaimen lives near some of the most famous coastline in Western Australia, home to some of Australia’s most spectacular sea life.

Jaimen decides that he is going to capture this world through photography and film. How? Through drone photography. He has enough dexterity in his hands to operate the equipment and more than enough intelligence to operate it skilfully. How fortunate to live in a time when one has this kind of technology!

Jaimen proves to be a wizard. As he tells us so enthusiastically in the film the images prove to be a huge hit on the internet, with millions of views. He shows us, the audience, some of his favourites. There’s a video of a large pod of dolphins blissfully surfing waves which is just wondrous.

As well as continuing to follow his pursuit of perfect images, FROM SKY TO SEA delves into his private life. Jaimen is given a lot of much needed support from his very loving parents who run a coastal surf and tour  guide service. Sometimes he gets to do the commentary on the boats which he enjoys.

With his quadriplegia Jaimen is quite philosophical about his chances of finding a woman to share his life with. To be alone is happily, however, not his fate.

A soulful young Canadian woman named Jess passes through his township. The two meet up and Jess falls for his beautiful ‘spirit’. Their love blossoms…

I don’t want to say too much more about the film. Just to say that Jaimen never stops reaching. His next big goal is to swim and film under water. A bit difficult for someone with quadriplegia! Difficult but not impossible, and Jaimen has always had that passion for the possible. We see him train to achieve his goal. You’ll have to see this gentle, poignant, understated film to see if he achieves it.

FROM SKY TO SEA has been written and directed by Leighton and Josie De Barros. The film is a FanForce production. Check the website for screening details