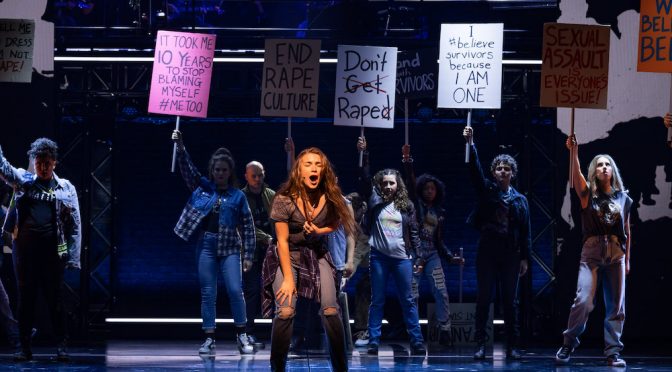 First, to make it clear, this show is not in the same genre as Beautiful : The Carole King Musical. The show is not biographical in nature. We do not get to know anything new about the Morisette story or what she is like as a person.

The show is built around a full length narrative pivoting around  about a fictional family, the Healys. This story, the book in music theatre parlance, has been created by Diablo Cody. Through the narrative intersperses many Morisette songs. Yes, of-course, there are all the songs from her breakthrough album Jagged Little Pill but there are also some of her other songs.

The show’s format works well. The narrative is forceful and engaging, and the songs, that essential ingredient, are fitted in well. They never felt out of place or clunky, one of the first tests for any new musical.

First to the music. I am a big fan of her music. I assume that most people who go to see the show are devotees, although there may be some who are curious and want to explore the Morisette experience.

Her songs seem to come out of a deep place within her and are realised with a raw power. My favourite renditions from the show; Hand In My Pocket, Ironic, Head Over Feet, You Oughta Know, You Learn and my personal favourite, the intimate, pure That I Would Be Good.

The narrative is bookended by two consecutive Christmas letters that mum, Mary Jane Healy (MJ) sends out to all her friends. The first letter is fairly matter of fact and introduces some of the main characters. The second letter glosses over the main events of a tumultuous year.

It’s a year where the audience sees a lot happen. Some of the issues that the show covers- rape, drug addiction, the struggle with work/life balance, the want of courage, marital pressures and youth alienation. The play is intense still through it Cody adds some touches of  humour.

This was a huge and intricate production that was directed by Diana Paulus. Paulus had an excellent creative team working with her to create the world for the actors to work in. The cast revelled in Sidi Larbi Charkazoui’s very good choreography. The striking backdrops were designed by Morgan Maroney and Michael Waters was responsible for the good sound design. The lighting design by Justin Townsend complemented and enhanced the moods and emotions portrayed on stage. All the action was augmented by a great on stage band, behind the action, led by Musical Director Tom Kitt.

Paulus drew out good performances from her cast who are all accomplished performers in acting, song and dance.

Natalie Bassingthwaighte was excellent as the good natured mum known by her initials MJ. She does her best to deal with challenging events happening around her as well as her own battle with drug addiction.

Tim Draxl played the anguished father Steve Healy who realises, almost too late, that his priority of work over his family has alienated them from him. Draxl’s tenor conveyed his despair over his choices.

Emily Nkomo was excellent as their black adopted daughter Frankie. She felt aggrieved that her brother Nick was the favoured child. As well, she was busy exploring her relationships and her sexuality.

Liam Head played her golden boy brother Nick who had just gained admission to Harvard much to the boastful delight of his mum. The play sees him try and rebel against the pressure of being the golden boy.

Frankie’s experimentation with her relationships sees her form two relationships. There is her troubled relationship with the fragile Phoenix well played by Aylan.

Then there is her gay relationship with Jo, played by a great Maggie McKenna whose biggest scene in the play is when they belt out a great version of the Morisette classic ‘You Oughta Know’ which sees her receives an extended ovation.

Jo is also the proactive person who comes to the defence of their friend Bella is raped after a debauched, drunken party. The shadow of the Brittany Higgins rape at Parliament House looms large over this aspect of the play. Frankie organises a stirring protest march. Grace Niell gives a good performance as the distraught Bella who is lucky to have her two girlfriends.

This is an impressive production, the first outside of Broadway, and is deserving of its return Sydney season. JAGGED LITTLE PILL opened at Theatre Royal Sydney on Sunday 17th July 2022 and is playing until Sunday 11th September 2022.