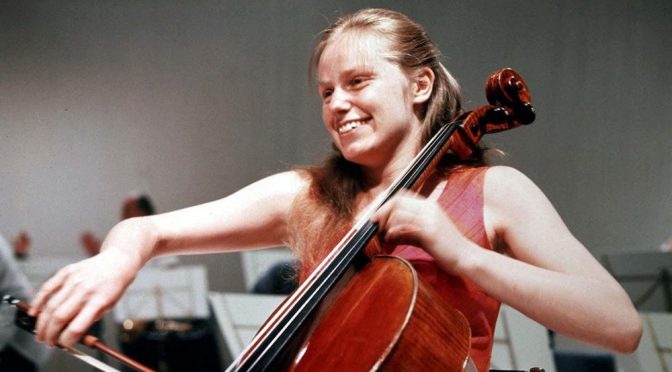 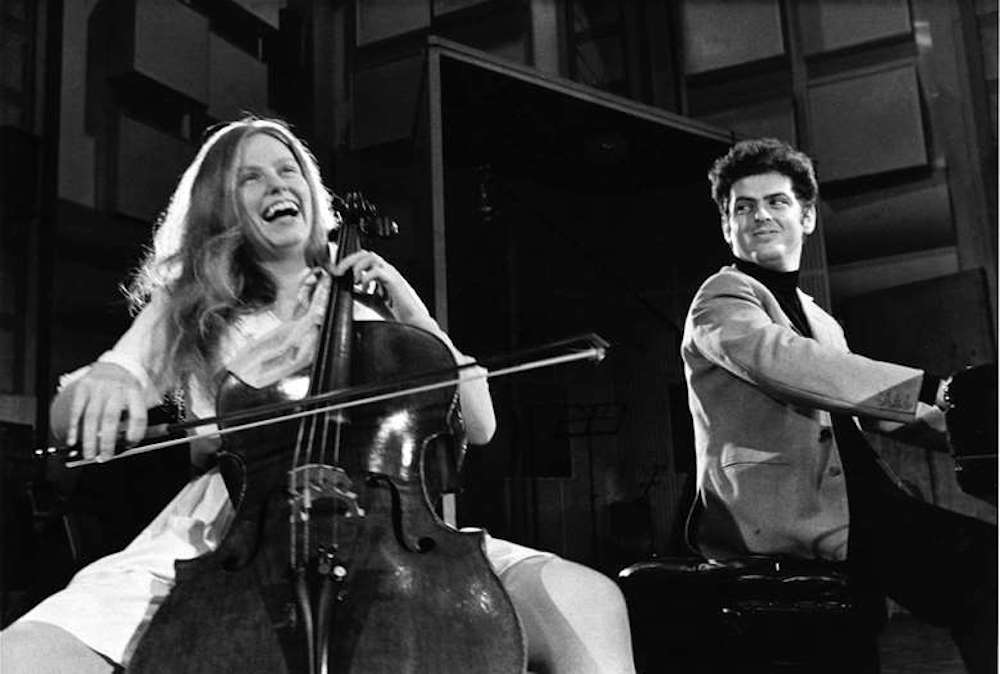 The great Spanish cellist, Pablo Casals, was close to tears as he was about to enter the hall in Puerto Rico where Jacqueline du Pré was due to play Elgar’s Cello Concerto. “I’m so looking forward to this,” he told Daniel Barenboim. “You must know, nobody has performed this concerto as well as Jacqueline until now, and nobody will play like her after.”

Jacqueline du Pré, known as Jackie to her friends, was in many ways an enigma.  Pristine and prim for her fans, the revelation of her later sexual fling with her brother in law created much controversy after her death.

It probably all started when she visited Russia in February 1966 to study with Mstislav Rostropovich.  One day, after she had returned to the UK her sister Hilary found her sobbing.  Jackie then confessed that she’d been raped while in Moscow.  “I was taken to a hospital in Moscow because I was frightened I might be pregnant,” she confessed.  But she wasn’t.

Jackie, by then, had become the darling of the musical world after making her performing debut on the cello at the age of 16.  That was in 1961.  But she’d been a child prodigy ever since the age of 4, when on hearing the sound of the cello on the radio she demanded from her mother to buy her ‘one of those’.  There followed years of entering competition after competition climaxing in her winning the Queen’s Prize for ‘outstanding musicians under the age of 30’.  The chief adjudicator was one, Yehudi Menuhin, who subsequently invited her to join himself and his sister in playing trios.

In 1967, just short of the Six-Day War in Israel, Jackie, much against her parents’ wishes, married Daniel Barenboim at the Western Wall in Jerusalem.  By then she had converted to Judaism.  They became known as ‘the golden couple’ in the music world.  But Jackie soon got tired of following Barenboim in his constant pursuit of music, either as a pianist or as a blossoming conductor, and by then Jackie had started to develop the symptoms that were to plague her for the rest of her life.

It all started after a simple medical procedure when, after recovering from the anaesthetic, she discovered a lack of control in parts of her body.  Eventually fatigue set in, but it was initially attributed to the frantic pace of the much-travelled soloist. She started losing feeling in her fingers and began falling down more frequently, plus she had difficulty getting up.

Consultations with therapists followed and the general conclusion was that she was tired and that a complete regime of rest and recuperation would fix the problem.  Jackie, however, thought she was going mad, and that belief was further exacerbated at times when she couldn’t feel the strings of her cello.

She took a break from performing in 1971.  By then Barenboim had debuted as a conductor with many leading orchestras including the London Symphony Orchestra (New York, 1968), Berlin Philharmonic (1969), and New York Philharmonic (1970).  His career was thriving which further alienated whatever relationship he still had with Jackie.

Jackie returned to the stage in 1973.  It was a disaster.  Critics were astonished at her deterioration, and she was now only too aware that her fingers would not follow the commands from her brain and, at times, she had to guess how far apart her fingers should be.  The final blow came at her last concert when Leonard Bernstein persuaded her to perform.  She even had difficulty opening her case.  Bernstein took her to hospital immediately afterwards.

Multiple sclerosis was diagnosed, a disease that affects the central nervous system where the immune system attacks the myelin, the protective layer around nerve fibres and causes inflammation and lesions. This makes it difficult for the brain to send signals to the rest of the body.  The diagnosis was confirmed in October 1973.

Barenboim tried vainly to interest her in accepting a role where she could analyse various scores of musical quartets, but Jackie couldn’t divorce herself from the cello repertoire she knew and had mastered.  Feeling alienated, Barenboim continued with his own flourishing career, basing himself in Paris, and even started a new relationship. Unbeknownst to Jackie, Barenboim had begun an affair with Russian pianist Elena Bashkirova who bore him two sons, Arthur (1983) and Michael (1985).  Barenboim believes that he successfully managed to keep the affair hidden from Jackie and he and Bashkirova married in 1988, a year after Jackie’s death.

During her struggles to find herself Jackie sought solace from her sister, and flautist, Hilary. In her book (A Genius in the Family and later made into a film and renamed Hilary and Jackie), written after Jackie’s death, Hilary claims that Jackie had come to live with her and husband, Christopher Finzi, because of Jackie’s fragile mental state.

Christopher Finzi was the elder of Gerald Finzi’s two sons.  Gerald was the composer of many art songs and founder of the Newbury String Players which Christopher took over after the death of his father. Christopher lived a bohemian lifestyle and being a pacifist, refused to do military service and was briefly imprisoned in 1955.  He was released and continued living at his farm in Ashmansworth, Hampshire.

According to his daughter, Clare, Chistopher Finzi (known as Kiffer} was a serial adulterer and Jackie was soon seduced into his web.

Jackie, Hilary and Kiffer decided to take a short holiday in France.

The following is an extract from Hilary’s book: “I fell asleep quickly, even though I was aware of Jackie’s quiet weeping.  But it was not long before I awoke with a start. I don’t know what alarmed me, a sixth sense perhaps but I did wake, razor sharp, to find Jackie was in bed with us.  Kiffer was in the middle, lying very still.  She was doing her best to rouse him……I didn’t sleep again that night.”  When Jackie started living at Ashmansworth, she would go for long walks in the woods with Kiffer, some were long, others even longer.

Eventually, Jackie retreated to London to be looked after by nurses and live-ins.  Barenboim would visit occasionally.  She had started using a wheelchair.

On October 19, 1987, Jackie developed pneumonia and lost consciousness.  Anthony Pleeth, the son of her favourite childhood teacher, was there at the time.  He went over to the gramophone in her room and started playing the recording of her Schumann Cello Concerto.  Accompanied by one of her greatest triumphs, Jacqueline du Pré passed away into immortality.