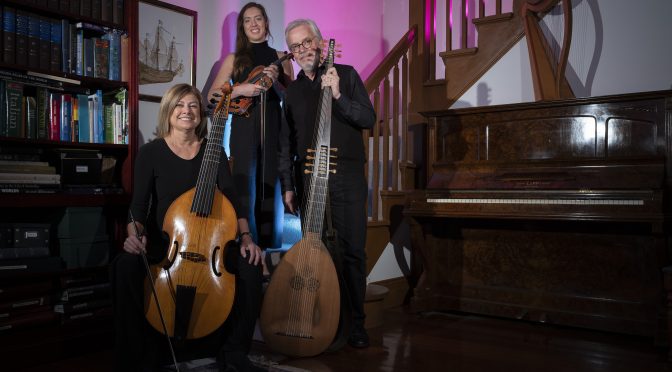 We in the developed West live in a highly individualistic and competitive world. Everything from aged and disability care to scientific research and road building is put out to tender, often with a view to using competition to drive the cost down. Our cut-throat politics is even worse. Political culture and processes are often quite damaging and abusive to women and minorities, as recent examples demonstrate. In contrast, music making is, ideally, a collective and collaborative activity.

From my perspective, I always need to have a collaborative relationship with my fellow performers, sound engineers, producers, graphic designers and even marketing and PR. I have to know that they believe in the music, that they are trustworthy, honest, and positive about the vision: what we are trying to achieve. This helps create a culture where everyone can do their best, where each person’s contribution is respected and through which the music itself shines. I believe deeply that when it comes down to it, what we are all called to do as artists is to leave our egos at the door and put the music first.

One project that illustrates the notion of collaborative music making in action is The Marais Project’s most recent recording, ‘Two.’ The two in question are me and early plucked instrument specialist, Tommie Andersson. Tommie and I have been playing together for a long time. I hesitate to say exactly how long but it is more than three decades. We share a love for French baroque music and the composer/performer, Marin Marais as well as a Swedish heritage. Our careers have grown in parallel and in a linked way. As a highly respected, founding member of the Australian Brandenburg Orchestra, Tommie spends a good deal of time with this band. In contrast, I have been a contributor to the Musica Viva in Schools program for many years and have given well over three thousand concerts in schools across Australia. This probably means I have given more paid performances on the viola da gamba than just about any other Australian. Since 2000 The Marais Project has operated in and around the gaps in our respective schedules and those of other group members and guests.

Given the sheer number of concert programs and recordings we have worked on, Tommie and I know each other’s playing backwards. But we are still learning, we are still trying to perfect the way in which we perform and share the music we admire.

Similarly, sound engineer, Chris Doherty and I have now partnered on some seven recording. Chris understands me, my style and preferred way of working. He and my long-term Producer, Llew Kiek, have helped shape my sound and my approach to recording. They have shown me what is possible in the studio, encouraged me, and have responded positively on those occasions when I have said ‘I want something different here’ or ‘can we make this sound better?’ We have also used the same graphic designer, Lyndall Gerlach, for virtually all our recordings. Lyndall is more than a designer: she is a very fine artist in her own right and musically sophisticated. She listens in detail to the tracks of each CD before she decides on a concept. She is a key part of the team.

It takes a village to create a recording.

‘Two’ was originally planned as the centrepiece of The Marais Project’s 2020 concert series. Sadly, as with so many musical and artistic events, the advent of Covid-19 meant the cancelation of scheduled performances. Not wanting to abandon the concept altogether, late in the year we went self-funded into the studio to produce this recording and an accompanying video which premiered on Melbourne Digital Concert Hall.

The idea behind ‘Two’ was that Tommie and I would play alternate brackets of unaccompanied solos on our respective instruments before embarking on a joint performance of a suite by Marin Marais. We have kept this structure on the recording with the exception that guest artist, Susie Bishop voice and violin, joins us for a gorgeous encore. We wanted to create the feel of a live performance in the way the music flows and the performers interact.

Playing unaccompanied is very exposing for string players. Tommie’s core instruments, the theorbo and the baroque guitar have a wonderful solo repertoire spanning hundreds of years. Less so the gallichon, a kind of bass lute, but Tommie arranged several pieces for this recording including a truly lovely Mozart adagio originally composed in the last year of Mozart’s life for that musical rarity, the glass harmonica.

The viola da gamba is endowed with a rich treasure of solo works that I have avoided performing in public up to now. For the first time in my career, I am stepping out of my comfort zone, facing my fears and recording some of my favourite unaccompanied pieces, including the world premiere of a work written for me by Australian composer, Paul Cutlan. I have just not had the confidence up to this point to either appear alone on the stage or in a recording. It helped that Paul Cutlan and I have known each other for many years and I deeply respect his musicianship. In some ways, I found it easier to record his new solo than to play well-known baroque staples.

As might be expected given our ensemble’s name, pride of place on ‘Two’ goes to that historic giant of the viola da gamba, Marin Marais. Between us Tommie and I have sixty years of experience in playing French baroque music and Marais in particular. If we were surgeons, we would be at the peak of our careers, strutting the health system as highly paid specialists working on the most difficult and complex cases. We would be driving BMWs and getting invited to conferences to share our wisdom! In contrast, as artists, we share our artistic wisdom in performing and recording – and at modest expense to those that listen to us. This is our operating theatre; this is what we do best.

It really does take a village to create art.