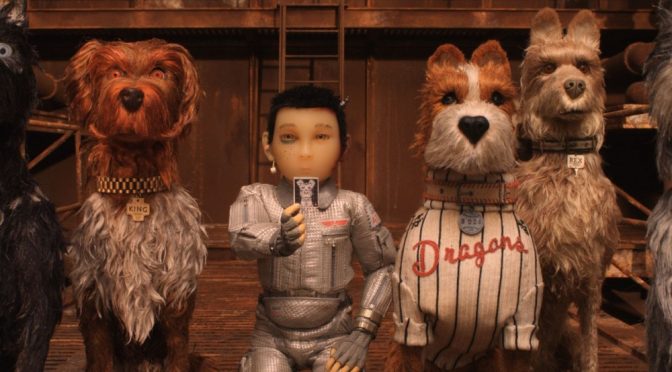 A canine quest, the catalyst of which appears to be a cat owner conspiracy to contaminate canines, Wes Anderson’s new film, ISLE OF DOGS is a sensational visual and aural experience, the funniest and furriest film you’ll see all year.

Fast and furriest, this high fidelity fido film tells the story of Atari Kobayashi, 12-year-old ward to corrupt Mayor Kobayashi, who, by Executive Decree, has exiled all the canine pets of Megasaki City to a vast off shore garbage-dump. In a palpable act of puppy love, Atari sets off alone in a miniature Junior-Turbo Prop and flies to Trash Island in search of his bodyguard-dog, Spots. There, with the assistance of a pack of newly-found mongrel friends, he begins an epic journey that will decide the fate and future of the entire ant-puppy Prefecture.

ISLE OF DOGS is a movie about talking dogs, yet, it’s not a cartoon—it’s a gorgeous, sumptuous feast of a film that pushes the boundary in terms of what a movie is. It is stop motion animation but of a kind that not only elevates and surpasses that technique, but by all the magical ingredients, makes the artifice honest, sincere and full of candor.

ISLE OF DOGS is set in a kind of an alternative reality. It looks and feels like Japan, but it’s a slightly dreamier version, an artistic license to unlock the imagination.

Translating the barks and bays, the howls and growls for human ears are a pack of pooch perfect actors.

Voicing the role of Chief, the fiercely independent stray who takes an unexpected turn, is Bryan Cranston. Edward Norton voices Rex, who as the pack’s industrious leader aims to keep the peace. As Boss, Bill Murray plays a dog who once had a grand purpose: as a sports mascot. Jeff Goldblum is the gossip hound, Duke, the chatty, curious hound who has his ears to the ground for the latest rumors.

Liev Schreiber voices the key role of Spots, the Short-Haired Oceanic Speckle-Eared Sport Hound, who was once the beloved assigned bodyguard to the Mayoral ward Atari, but is now lost to the winds on Trash Island. Bob Balaban’s character, King, had risen to the heights of canine celebrity as spokesdog for Doggy Chop dog food, before he found himself deposited on Trash Island.

Among the most enigmatic of Trash Island’s dogs is Nutmeg, the coquettish show dog with her femme fatale persona and curiously spotless coat of fur. She is played by Scarlett Johansson . Tilda Swinton voices the dog known far and wide as Oracle for her visions, and her understanding of television and the venerable F. Murray Abraham soothes with mellifluous, the wise, Turpentine Brandy-lapping Jupiter.

Anderson and director of photography Tristan Oliver re-united on ISLE OF DOGS for the first time since FANTASTIC MR. FOX. Oliver, a stop-motion specialist who worked on the original, classic Claymation WALLACE & GROMIT shorts and shot such stop-motion features as CHICKEN RUN and PARANORMAN, obviously a kindred spirit to Anderson, pursues to brilliant completion Anderson’s unique approach to lighting, hue, framing and composition.

A Taiko drummers and Prokofiev influenced score by Alexander Desplat is the perfect aural accompaniment to the visual pleasures of ISLE OF DOGS. These mutts are a must see.