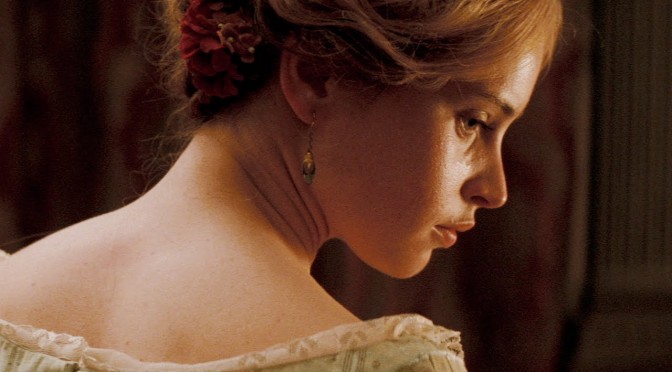 Sounds like the title of a companion piece by H G Wells but THE INVISIBLE WOMAN is the fascinating story of Nelly Wharton Robinson who captured the heart of Charles Dickens.

Nelly was part of the all female acting troupe that comprised her mother, Catherine Ternan and her older sisters Fanny and Maria.

Not as accomplished as her siblings, Nelly nevertheless exudes a charm that absolutely besots the charismatic Dickens, a good twenty five years her senior and married with a brood of kids.

His wife, Catherine, has grown fat and exhausted from being, it seems, nothing more than a brood mare. Dickens on the other hand, is exuberant and energetic, his prodigious talent feeding its own enthusiasm and creating a cult of celebrity about him.

The Charles Dickens revealed in THE INVISIBLE WOMAN is a man possessed of ferocious energy. Not only does he juggle a young mistress with marriage and 10 children, but he successfully maintains a vigorous writing regime and roles as a journalist, actor, theatre director, social campaigner and celebrated bon vivant.

Based on the book by Claire Tomalin, THE INVISIBLE WOMAN boasts another brilliant screenplay by Abi Morgan whose litany of fine scripts include the feature films SHAME and THE IRON LADY, and the TV series, THE HOUR.

THE INVISIBLE WOMAN is directed by Ralph Fiennes, who also stars as Charles Dickens. Both before and behind the camera, Fiennes shines in a show of compelling craftsmanship.

His staging of the Doncaster races alone is worth the price of admission.

In the title role, Felicity Jones is far from invisible, luminous in her portrayal of a woman burdened yet bedazzzled, fragile yet feisty, unsaddled from the steed of society yet steely willed enough to remount, redefine and reinvent herself.

As her mother, Kristen Scott Thomas’ performance is a precursor to her daughter’s resilience, a pragmatic parent concious of the precariousness of her family’s profession and the pitfalls of her daughter embarking on an adulterous affair.

Joanna Scanlan is a revelation as Catherine Dickens, whose decade of pregnancy and weaning having deadened desire in the marital relationship. They are both fond of each other but the affection is no barrier to the ardour Dickens now has for Nelly.

Scanlan is startling in every scene but especially heartbreaking in the delivery of the bracelet which was mistakenly delivered to Catherine but intended for Nelly. There is this inference Dickens put Catherine up to hand deliver it to Nelly. Then there was the brutal moment of the bricking up of the door between the dressing room and the bedroom, which is when the dressing room became Dickens bedroom which was the moment of separation. These come as moments of surprise and deep pain for Catherine, and the portrayal is exquisite.

THE INVISIBLE WOMAN is much more than a costume drama, although the wardrobe by Michael O’Connor, who won an Oscar for The Duchess, is meticulously and gorgeously rendered, as is the production design by Maria Djurkovic and Jenny Shircore’s hair and make-up design. Shircore won an Oscar for her work on Elizabeth.

As good as anything written by Dickens himself, THE INVISIBLE WOMAN deserves to fulfill great expectations at the box office.