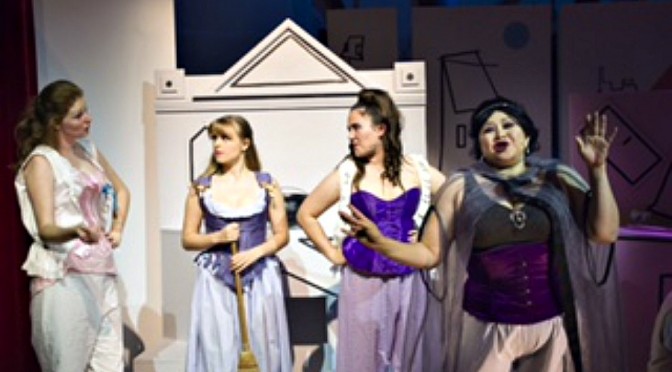 This production is theatrically and impossibly brilliant and clever too, unlike the recent Disney movie version …

Once upon a time, there lay a small village at the edge of the woods, in a far off fairy tale kingdom. Full ensemble cast, a more traditional version of the twisted fairy tale that is INTO THE WOODS as created by James Lapine and Stephen Sondheim, with this inspired vision by director Leonie Cambridge, assisted by Peter Meredith. No expense has been spared, and each character is fully costumed and instantly recognisable. Musical direction by Anthony Cutrupi, and carefully orchestrated choreography by Melissa Trickey.

With stylised movable sets for the woods and the homes to create each scene, however for this production, Grandma’s House is just the bed, and there is a full-time-actor in the role of the Milky-White-Cow, and a delightful and very tall golden-egg-laying giant hen, is a gift double-up-role (uncredited) for one of the evil sisters (Heather Campbell).   Far deeper meaning exists in all your well-remembered childhood fairy tales, than ever can be found in the many life lessons that are only learnt as an adult. This is not INTO THE WOODS whittled down into its “imagined state”, where your vivid imagination is always required to visualize each scene.

This Broadway musical concerns the fairy tale lives of Cinderella, Little Red Riding Hood, Rapunzel, plus Jack and the Beanstalk, whilst Snow White and Sleeping Beauty also get a mention. These very familiar childhood fairy tales, easily permit us to re-interpret our emotions, and more easily understand every day personal events. However their fairy tale lives have been interwoven together, to create this new and very complex fairy tale musical, with more than a dozen memorable songs, each with thought-provoking lyrics that greatly expand the narrative. Despite many adversities, all their many wishes have been granted by the conclusion of Act One.

After interval the tone has changed, and surprisingly the kingdom is different and dark. Witches, cruel elder step-siblings, and stepmothers remain powerful images from our collective childhoods, and there now is a strong female protagonist in the the fairy tale heroine (Cinderella) planning to defeat  the powerful but near-sighted female monster (the giant ogre) who has been causing with each gigantic footstep, the almost complete destruction of all the homes in this fairytale world.

Now everyone is truly in character, and the many well-aimed laughs do easily brighten the undercurrents, as more and more of the cast dies, soon you begin to wonder as to how many will survive to be there at the end. Cinderella’s dream life with her Prince Charming is shattered, because Prince Charming is anything but charming, as her Prince eagerly attempts and then succeeds in soliciting adultery from the Baker’s Wife, simply because the Prince was raised to be charming, and not sincere.

Well chosen ensemble cast, yes, however this unique production has three stand-out performances with the casting of Cinderella (Alexandra de Zwart), the Baker’s Wife (Jessica James-Moody) and the Witch (Chapin Ayres) – because after interval these three provide fresh performances that vividly bring their characters fully alive. It was an absolute pleasure to experience Squabalogic’s Jessica James-Moody starring in a major lead role. A fast-paced 165 minutes, including the interval. Recommended.

INTO THE WOODS presented by Chatswood Musical Society at the Zenith Theatre, corner McIntosh and Railway Streets, Chatswood. 1-9 May 2015.