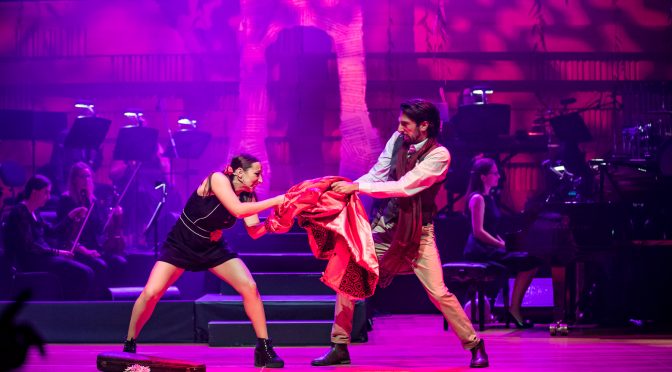 Jordan and Laura Vassallo took a brave step in choosing to produce and present this very difficult Sondheim classic for the inaugural show of their new company Bloom Creative Productions directed by Jordan. If they had any trepidations about their choice they needn’t have worried. In a lesser director’s hands this show may not have succeeded, but instead it was indeed a triumph.

Taken from the tales of The Brothers Grimm, the story follows The Baker and his Wife, who wish to have a child. Cinderella, who wishes to go to The King’s Festival, and Jack, who wishes his cow would produce some milk. (Lots of wishing going on here, it seems.) The Baker and his Wife meet up with the neighbourhood witch, (every neighbourhood’s got one apparently) who reveals to them that she has placed a curse on their family, so the two set off “Into the Woods” to reverse the curse. There’s flesh-eating wolves, little girls in red capes, randy princes, grannies and giants, all with their own particular agendas. (All good kiddie fairytale stuff). Things don’t go to plan, but in the second act everything comes together like a well-baked Christmas pudding, and like all good fairy tales, it all ends happily.

Most musicals will usually have, perhaps two, four, six leads and the rest of the cast comprise the ensemble. In this piece there is no ensemble as such, but is replaced by the entire cast, thereby moving the action along by each member continuing the storyline.

Space doesn’t permit me to single out each performer, and it would be unfair to do so. Suffice to say that every actor was equal in vocal capacity as well as acting ability, and all gave a high-energy knock-out performance. Each performer complemented the other, and the overall blend was as close to perfect as both a director and an audience could wish for. Strong harmonies from the duets to the quintets.

Presenting the show in concert style allowed both musicians and performers to immerse the audience in the brilliant music of Stephen Sondheim.

Musically directed by Peter Hayward, the fourteen-piece orchestra complemented the singers throughout, giving them all the support necessary for such a difficult piece.  It undoubtedly gave the singers confidence in having the backing of such a fine ensemble.

Being a concert performance, there was no need for elaborate sets, so Designer Neil Shotter’s imaginative giant willow tree at the rear of the stage with branches hanging down at the front certainly gave the impression that we were, indeed, ‘into the woods.’

Always too numerous to mention, but of course essential to the running of any professional show. Under the capable direction of Stage Manager Jonothan Page, all the crew, (well over thirty), obviously worked together as a coherent team to pull this piece together. Bouquets to all those not mentioned.

This was a thoroughly professional production in every single aspect, and the many members of the audience who gave it a very enthusiastic standing ovation after the final curtain, (well, blackout), obviously agreed.

INTO THE WOODS had a far too brief season at the Concourse, Chatswood playing between the 21st and 23rd March 2019.