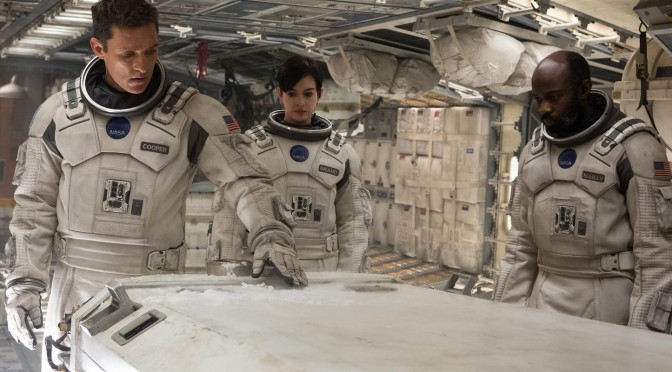 Matthew McConaughey plays the former NASA pilot who propels his space craft through a wormhole located near Saturn, that exits near a Black Hole located in another galaxy, with a team of explorers to travel to twelve possible earth-like planets in those galaxies, without the previous limitations of human space travel.

In many ways this thrilling movie features huge, coruscating kaleidoscopes of expansive vistas, that fill one with hope for the future of humanity. Nevertheless, I did  have some reservations. Nolan’s epic film needs to be severely re-edited,  as it is a minimum of fifty minutes too long, and is in dire need of having various long sequences, including the unnecessary lengthy melodrama about the absent father (Matthew McConaughey), shortened and tightened or removed.

I also had an issue with the same identical presentation problems, experienced at three different cinemas, with some of the film’s spoken sound quality being muffled and distorted by ambient sound. It was impossibly difficult to hear two essential dialogue sequences from both Matthew McConaughey and Michael Caine, and perhaps also not helped by the actors mumbling those very important words.