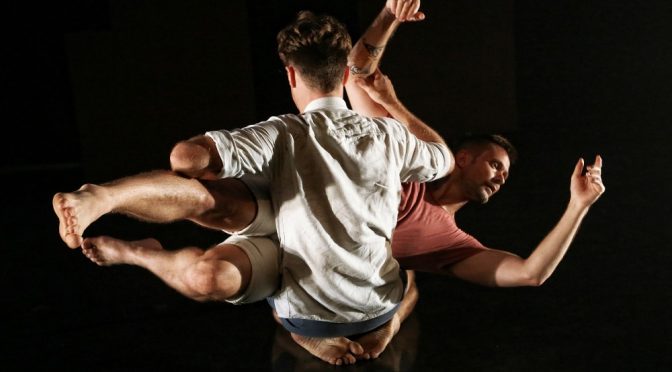 IN DIFFERENCE, part of FORM Dance Projects ‘ 2017 and also linked to the current Mardi Gras festival, is a challenging, at times confronting  work, dazzlingly danced by a tremendous cast, that challenges our thoughts and preconceptions in regards to  LGBTI marriage and (in) equality.

Craig Bary, with his co-creators and performers Kristina Chan, Timothy Ohl and Joshua Thomson, has devised a show that represents two real life couples, one of heterosexual and the other of homosexual orientation.

This work, through a series of ordinary and extraordinary everyday life moments, explores how we interact and express ourselves no matter what our sexual orientation is.

The bleak scaffolding set is shifted and rotated by the cast, allowing for fluid scene changes .Karen Norris‘ lighting is often shadowy and ominous. Eden Mullholland‘s soundscape thrums, beeps and pulsates, and includes songs as well as voice overs of various incendiary speeches about LGBTI marriage and equality.

Bary’s athletic choreography is stunning and the cast perform with intense passion and commitment. His choreography demands a fluid yet laser sharp line and involves some unusual partnering and lifts. At various points there are simultaneous pas de deux on both sides of the stage with the set shifting so we can glimpse both.

At other times the cast ebb and flow. Sometimes tiny everyday movements are taken and developed into very different forms from solos to duos to quartets. At times almost slow motion is used.

At one point there is an excellent pas de deux where the dancers, while linked, are twisting and turning away from each other. In another section it is as if Chan manipulates and controls the two men in the ‘gay’ couple.

One section has the four in unison with rippling snake arms. Ohl has a mesmerising solo,  nightmare like, where his foot are stuck to the floor. One of the male duos become like a sinuous , sculptural wrestling match .

Through empathy and tenderness IN DIFFERENCE references some of the triumphs and heartaches that are intrinsic in the our very human pursuit for connection.

The show ends on a somewhat hopeful note with the houselights coming up and the four performers walking towards the front of the stage, then staring at the audience.

Will same sex marriage bills be passed by our government sometime soon? We can only hope !

Running time – just under an hour no interval.

IN DIFFERENCE played at the Riverside Theatres, Parramatta between 2nd and 4th March.