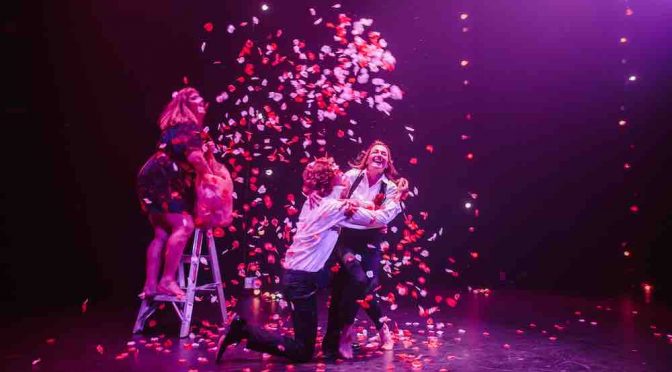 In the Good Room’s I WANT TO KNOW WHAT LOVE IS structured their piece of theatre around material sourced from members of the public being invited to anonymously submit their stories of love online. These ranged from confessions and quirky anecdotes to stories of heartbreak and first love. While most submissions were romantic, they also included warm stories of familial love.

#285 you steal the blankets but somehow i don’t mind

#331 I’m in love with both of them, I feel like they both love me back, and I’m pretty sure they love each other.

#703 love is having sex in unconventional places like a car, while your friends sit on the kerb and watch

Over 800 secret submissions were received and transformed into a work of theatre by the writing team of Daniel Evans (director), Amy Ingram (currently the Female MC in Magic Mike Live), Caroline Dunphy, Kieran Swann (designer) and Lauren Clelland.

The show was a mixture of story, movement and song. The performers were Tom Cossettini, Amy Ingram, Katrina Foster and Emily Tomlins.

At various times through the show hosts of rose petals rained down  from the roof of the theatre.

In my favourite scene one of the female performers rolled along the stage and then, from the rose petals, sculpted the outline of a human body and then ‘fell’ into it. Lovely stuff!

Plenty of pop/dance tunes played through the show with plenty of people, there were mainly young people in the audience, bopping in their seats and singing along.

I wish I could say that I enjoyed the show as much as many in the audience did. I found the show jarring, quite deliberately at times. Maybe this is the modern way…

In a bit of a way the show felt like a bit of a piss-take on the whole genre of confessional theatre and that rubbed me up the wrong way. This doesn’t work.  You can’t have it both ways. A show has to decide what it wants to be and stick to it.

The show was publicised as a gentle, reflective kind of show and it simply was not that!

The show was a co-production  by The Good Room and Critical Stage Touring.

Featured image : The Good Rooms ‘I WANT TO KNOW WHAT LOVE IS’. Pic by Stephen Henry