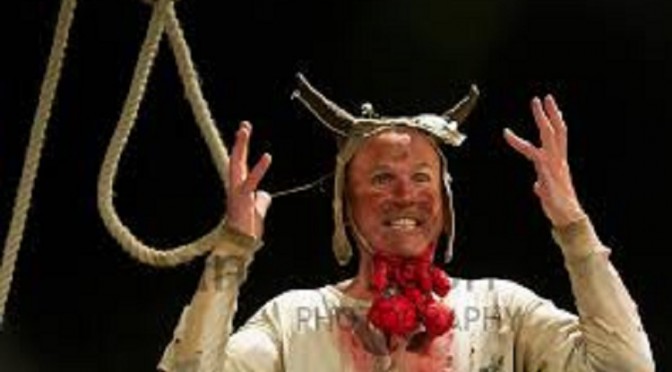 There’s a complete and utter nutter already on the sparsely dressed stage when the audience enters the small theatre for the Sydney Festival production of Tim Crouch’s I, MALVOLIO.

The nutter is Malvolio (Tim Crouch), steward to the beautiful and aristocratic Olivia in Shakespeare’s Twelfth Night.

We’re more used to seeing Malvolio formally attired rather than in this hideously stained and bespattered, and torn and moth-eaten, one-piece undergarment which his arse is literally hanging out of. He’s also wearing a grubby medieval-looking cap festooned with antennae-like wires and two horns, and a bright-red gonad-like turkey’s wattle around his neck.

This unhinged Malvolio has broken free from the confines of Shakespeare’s convoluted plot and, in a mischievously malevolent way, toys with the small audience of less than 100 people.

Veering between slapstick (e.g. a “Kick me” sign) and black humour (e.g. a mock hanging), Malvolio sets out to insult as many people as possible in the audience, vowing (in Shakespeare’s words) “I’ll be reveng’d on the whole pack of you.” It would be wise to be neither a late arrival nor a male hipster with a shock of hair dyed electric blue, both of whom were picked on mercilessly in the performance reviewed here.

No wonder then that John Cleese once played Malvolio in a Royal Shakespeare Company production of Twelfth Night; or that some critics have in turn likened Cleese’s Basil Fawlty character to Malvolio.

Talking about this play, Crouch says, “I like the irony that he is a theatre-hating puritan stuck inside a play – prone to all the random chaos an audience can inflict on a performer.” In I, MALVOLIO Crouch makes the most of this irony to create a compelling, if at times grotesque, piece of entertaining theatre which the audience will never forget.

I, MALVOLIO is one in a series of plays that Crouch has written, looking at the world through the eyes of Shakespeare’s lesser characters (the others are Caliban, Peaseblossom, Banquo and Cinna).

I, MALVOLIO plays at the Carriageworks from Thursday 16 January to Sunday 19 January 2014.